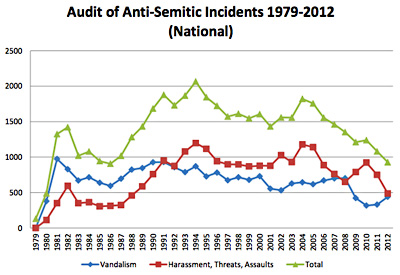 In a recently updated post over at Vox, Zack Beauchamp has a longish write-up about the disturbing recent rise of anti-Semitic violence. But there’s an interesting thing about it.

First off, here’s the rate of anti-Semitic incidents in the U.S., as tallied by the Anti-Defamation League. What you see is a peak in the early 90s and a decline ever since. This is exactly the same thing that you see in rates of violent crime in general. In other words, as violent crime fell, violent crime directed at Jews also fell. This makes sense.

But the global picture is quite different. Partly this is probably due to the fact that the worldwide numbers come from a different source (the Kantor Center in Tel Aviv) and are tallied up using a different methodology. But I doubt that accounts for the stark contrast: worldwide, anti-Semitic attacks have been on a straight 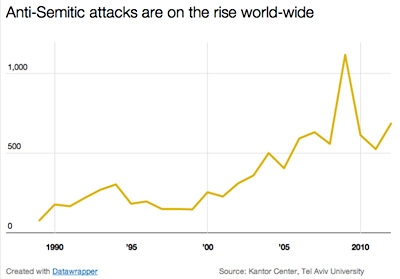 upward path ever since the late 90s. This is despite the fact that violent crime in Europe, which accounts for most of the incidents, has followed a trajectory pretty similar to the U.S. The exact dates when violent crime peaked and then started to fall are a little different in different countries, but not by a lot.

The Kantor data also shows that anti-Semitic violence in Canada tripled in the past decade. This is especially unusual. Canada is culturally more similar to the U.S. than Europe is, and the rise and fall of violent crime in Canada has been nearly identical to that in the U.S.

The conventional conclusion from this is, first of all, that anti-Semitic violence in Europe is triggered by events: Israeli incursions into Gaza, the various intifadas, copycat attacks, etc. So you see peaks that correspond to these events, which drives up the trend numbers as triggering events increase. Beyond that, there’s a broad increase in attacks that’s most likely related to the influence of far-right parties in European countries. The U.S. is different because it has no equivalent far-right parties of any strength, and because, apparently, American anti-Semites aren’t especially motivated by specific events. We just have a subset of violent criminals who decide to take out their anger on Jews, and do so fairly randomly.

As for Canada, I don’t even have a guess. I would expect their trend rate to be similar to the U.S., but it’s clearly not.

I don’t have a sharp point to make about this. I just thought the stark difference between the U.S. and Europe was interesting, as was the fact that the U.S. numbers appear to be driven by overall levels of violent crime, while European numbers are driven by something quite different. Comments welcome.