Republican hawks have insisted from the start that President Obama isn’t being tough enough in his approach to the Ukraine crisis. And perhaps he isn’t. It’s a point that’s arguable by reasonable people.

But what’s not arguable is that regardless of what Obama would do if he had a truly free hand, he pretty clearly doesn’t have a free hand. Ukraine is, first and foremost, a European problem, and the leadership of 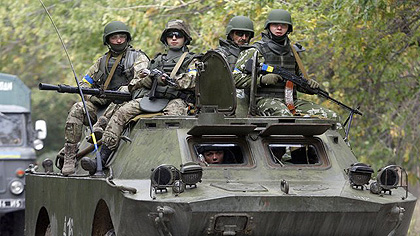 Europe just isn’t on board with a more aggressive strategy against Russia:

Through nine months of struggle to halt Russia’s military thrust into Ukraine, Western unity has been a foremost priority for American and European leaders. Now, with the crisis entering a dangerous new phase, that solid front is in danger of collapsing.

….A growing number of U.S. officials, and some in Europe, particularly in countries bordering Russia, believe that the only way to dissuade Russian President Vladimir Putin from continuing what they see as an invasion of Ukraine is to raise the military cost to Moscow. That means giving the Ukrainians better weapons, they say.

….But the Germans, French and many other European leaders are equally convinced that arming the Kiev government will not halt Putin, but will increase carnage in a war that already has killed about 5,300 people and risk an all-out East-West confrontation.

[German Chancellor Angela] Merkel, speaking at a security conference in Munich, Germany, made clear that not only would Germany not contribute arms, but it also opposed allies doing so. “Military means will lead to more victims,” she said, arguing that the West should apply a patient containment approach toward Russia.

I’m skeptical about providing arms to the Ukrainians, but I remain open to arguments that it’s the only way to stop Vladimir Putin’s aggression. However, there’s just no way that this will work without European cooperation. End of story. The US can’t pretend that acting on its own has even the slightest chance of success.

So the hawks need to stop obsessing over Obama’s alleged weakness, and instead look overseas. The truth is that Obama has been one of the most aggressive of the Western leaders in the fight against Putin, while it’s Merkel and her colleagues who have insisted on a less confrontational approach. If John McCain and his buddies want to arm the Ukrainians, they need to figure out a way to persuade Merkel that it’s the right thing to do. That might be less congenial for their tea party buddies, whose interest in Ukraine is pretty much zero aside from its role as a way of painting Obama as a weak-kneed appeaser, but it’s the only way they might get what they say they want.

So that’s their choice. Continue bashing Obama, which feels good but will get them nowhere. Or start pressing our European allies, which is boring and difficult and pays no political dividends—but which might actually get them closer to what they claim is their goal. Which is it going to be, boys?