I could use a good laugh, and this afternoon I got one. For starters, as the White House hinted yesterday, Joe Biden won’t be attending Benjamin Netanyahu’s speech next month before a joint session of Congress. Apparently he’ll be out of the country that day:

The vice president’s office on Friday confirmed the plans to skip the March 3 speech. “We are not ready to announce details of his trip yet, and normally our office wouldn’t announce this early, but the planning process has been underway for a while,” a spokesperson for the office said.

So where exactly will Joe be? Well, um, somewhere. The planning process “has been underway for a while,” the White House insists with a straight face, but they don’t know yet what country they’ve been planning to send him to. But they’ll think of one. Maybe Latvia or something.

This is all part of the mounting fury from Democrats in Congress and the White House over the speech, and it’s become increasingly clear that the whole thing is a major blunder for Netanyahu. But who to blame? The invitation came from Speaker of the House John Boehner, so why 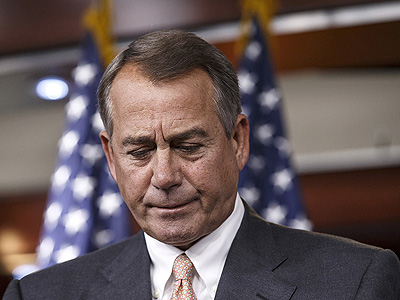 not blame him? Today Netanyahu did exactly that, throwing him under the proverbial bus with barely a passing glance:

A senior Israeli official suggested on Friday that Prime Minister Benjamin Netanyahu had been misled into thinking an invitation to address the U.S. Congress on Iran next month was fully supported by the Democrats….“It appears that the speaker of Congress made a move, in which we trusted, but which it ultimately became clear was a one sided move and not a move by both sides,” Deputy Israeli Foreign Minister Tzachi Hanegbi told 102 FM Tel Aviv Radio on Friday.

Poor John Boehner. You almost feel sorry for the guy sometimes. President Obama has been running rings around him for months now, infuriating the Republican caucus and causing Boehner endless headaches over Cuba, immigration, net neutrality, Homeland Security shutdowns, and dozens of other subjects. No matter how hard he tries, Boehner just hasn’t been able to get ahead of any of this. Instead he’s been forced over and over to respond to Obama’s agenda while desperately trying to keep the peace among the tea partiers who control his future.

Then, finally, it looked like he’d pulled something off. He announced the Netanyahu speech two weeks ago, catching the president off guard and garnering huzzahs from every corner of the the conservative movement. Finally, a victory!

But now it’s all turned to ashes. His big spectacle is in tatters, with Democrats in open revolt and pundits of all stripes agreeing that he overreached by going around the White House on a foreign policy matter. It’s been nothing but a headache, and even Netanyahu has joined the lynch mob now. What’s worse, there’s nothing he can do. The speech is still four weeks away, and Boehner has no choice but to let the whole dreary debacle play out. He already knows his show is a flop, but the curtain has to come up anyway and Boehner has to keep a stiff upper lip the whole time.