Josh Barro thinks our cities are building too much light rail. It’s expensive, often slow, and offers virtually no advantage over simply opening up a bus line. The problem, according to a 2009 report from the Federal Transit Administration, is that “Bus-based public 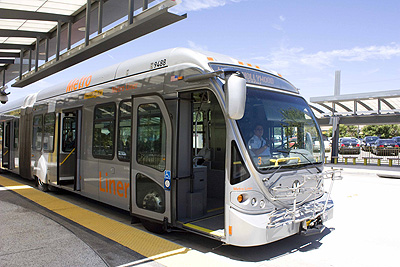 transit in the United States suffers from an image problem.” But what if transit agencies tackled that image problem head on?

That 2009 transit report gives reason to believe it’s possible. The researchers conducted focus groups with “choice riders” in Los Angeles: people who have cars but sometimes use transit. These riders had an unsurprising preference for trains. “Riding the bus carries a ‘shame factor,’ ” the researchers found. “Most of the choice riders would not consider using it, or if they did, they would feel ashamed and keep it a secret.”

But what the local transit agency marketed as the “Orange Line” — really just a bus route in the San Fernando Valley with high frequencies on a dedicated right of way — managed to gain acceptance among “choice riders.” Focus group participants “used terms like the ‘train-bus’ or the ‘bourgeois bus’ to describe the Orange Line service,” the researchers said. The Orange Line has repeatedly beaten its ridership estimates, and nearly half its riders have access to a car, compared with just a quarter on regular local bus routes in Los Angeles. That performance shows it is possible to overcome anti-bus bias with the right amenities and marketing.

My experience here is vanishingly small since I own a car and rarely use the bus, but I’d add the “danger” factor to the “shame” factor. I can recall a few occasions where I’ve ridden a local bus for one reason or another, and when I mentioned this my friends were agog. They acted as if I’d literally taken my life in my hands. “Isn’t that dangerous?” they asked. Well, I dunno. I got on, paid the fare, sat down, and waited until the bus got to my stop. Then I got off. End of adventure.

So perhaps we need a two-pronged marketing campaign if we want to attract more suburbanites onto buses. They need to be convinced that new bus lines are both bourgeois1and safe. I might add that although Barro doesn’t highlight this particular feature, the Orange Line mentioned in the report also has “high frequencies.” That’s a key feature too, and it costs money. But it still costs less to run a high-frequency bus than an above-ground light rail system.

Maybe we need more celebrities to ride the bus. I’ll bet if George Clooney took the bus to work, it would suddenly become a lot more popular. You’d probably need to increase service to accommodate all the paparazzi, but surely that’s a small price to pay?

1I confess to some curiosity here. Did focus group participants really refer to the Orange Line as a “bourgeois bus”? That seems a bit unlikely to me.