I see that Martha Raddatz’s interview with presidential wannabe Scott Walker is making the rounds today. And deservedly so! After listening to Walker blather a bit about America’s need for “big, bold ideas,” Raddatz asks him, “What is your big, bold, fresh idea in Syria?” Walker hems and haws a bit about being tough and aggressive, and then we get this:

RADDATZ: You don’t think 2,000 air strikes is taking it to ISIS in Syria and Iraq?

WALKER: I think we need to have an aggressive strategy anywhere around the world. I think it’s a mistake to —

WALKER: I think anywhere and everywhere, we have to be — go beyond just aggressive air strikes. We have to look at other surgical methods. And ultimately, we have to be prepared to put boots on the ground if that’s what it takes, because I think, you know —

WALKER: I don’t think that is an immediate plan, but I think anywhere in the world —

RADDATZ: But you would not rule that out.

WALKER: I wouldn’t rule anything out. I think when you have the lives of Americans at stake and our freedom loving allies anywhere in the world, we have to be prepared to do things that don’t allow those measures, those attacks, those abuses to come to our shores.

So there you have it. Walker is so unprepared to talk about foreign policy that he gets quickly trapped into suggesting that we put more American troops into Iraq and Syria to fight ISIS. Did he really mean to do that? Or was he just feeling the pressure of a live interview and felt like he had to say something? Hard to say. A more experienced candidate would have tap danced a lot more effectively, probably with some 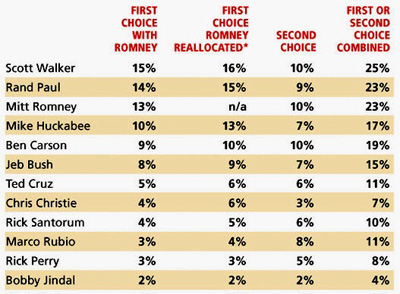 prattle about arming our allies or something—though Raddatz undoubtedly would have pounced on that too.

Michael Tomasky remains pretty unimpressed with Walker, especially after finally listening to his big speech in Iowa from last weekend:

If this was the standout speech, I sure made the right decision in not subjecting myself to the rest of them. It was little more than a series of red-meat appetizers and entrees: Wisconsin defunded Planned Parenthood, said no to Obamacare, passed some kind of law against “frivolous” lawsuits, and moved to crack down on voter “fraud””—all of that besides, of course, his big move, busting the public-employee unions. There wasn’t a single concrete idea about addressing any of the major problems the country faces.

Well, that will come—though it’s unlikely that Walker’s ideas will be any different from the usual Republican boilerplate of the past decade or so. Lower taxes and less corporate regulation will supercharge the economy! Hooray!

Walker still has a ways to go before he’s ready for prime time. But I’ll bet he gets there. He’ll learn from his mistakes, and he’s just about the only Republican candidate who has potential appeal to both tea partiers and mainstream voters. Six months from now minor early stumbles like this will be ancient history, and he’ll have his campaign schtick much more finely honed. He remains a serious contender.