AP reports that there are hints of progress in talks with Iran over its nuclear program. The US and its allies have been insisting that Iran substantially reduce the number of centrifuges it operates, which so far Iran has refused to do. This leaves Iran in a position where it could enrich enough uranium to make a bomb in less than a year. But now a new proposal is on the table:

According to the diplomats, the proposal could leave running most of the nearly 10,000 centrifuges Iran is operating but reconfigure them to reduce the amount of enriched uranium they produce.

One of the diplomats said the deal could include other limitations to ensure that Tehran’s program is kept in check. For one, Iran would be allowed to store only a specific amount of uranium gas, which is fed into centrifuges for enrichment. The amount of gas would depend on the number of centrifuges it keeps.

Second, Iran would commit to shipping out most of the enriched uranium it produces, leaving it without enough to make a bomb. Iran denies any interest in nuclear weapons and says its 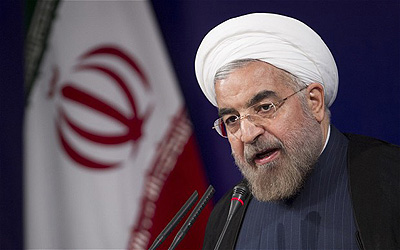 program is for peaceful uses such as nuclear power and medical technology.

Is this for real? Even Iranian president Hassan Rouhani says “we have narrowed the gaps.” That’s promising, but in the end there’s just no way to tell yet what this means. Reconfiguring centrifuges is clearly not as permanent a solution as destroying centrifuges, since they can always be reconfigured back to their original state. But then again, nothing is a permanent solution. If Iran agrees to a deal, and later decides to renege on it, then it’s going to renege. It will build more centrifuges or reconfigure existing ones, and the difference is fairly small. As with all deals everywhere, it fundamentally depends on both sides abiding by it. That’s just the reality of international agreements.

Politically, though, a deal like this might put Republicans in a tough position. Let’s suppose the best: Iran’s nuclear capability is substantially reduced; there are strict controls on both uranium feedstock and the amount of enriched uranium that remains in Iran; and a suitably stringent monitoring mechanism is put in place. In return, sanctions are gradually lifted.

How would Republicans react? Their initial response would almost certainly be to oppose the deal. And who knows? That might be their final response too. But the 2016 presidential campaign throws a monkey wrench into things. On the one hand, flat-out opposition would play well with the tea party base. Can’t look weak, after all. On the other hand, flat-out opposition puts Republican candidates in a tough spot, especially during the general election. What’s their alternative, after all? You can count on Iran to make it crystal clear that this is the only deal on the table—and if it’s not accepted, they’ll accelerate their nuclear program. So if Republicans oppose it, they need to endorse either tougher sanctions or else military action. The former doesn’t have much oomph, and the latter would scare the hell out of mainstream voters.

Obviously things aren’t as simple as this. There are ways to tap dance around all this. Still, if the deal looks reasonable to voters, it could become a dangerous campaign issue for Republican candidates. Stay tuned.