West Coast port operators are shutting down for a few days because “they don’t want to pay overtime to workers who, they allege, have deliberately slowed operations to the point of causing a massive bottleneck.” This is part of an increasingly rancorous labor dispute, but as usual, 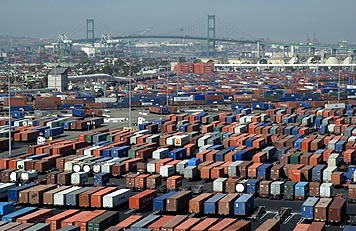 we really have no idea what the dispute is about:

Dockworkers are among the best paid blue-collar workers in the country, earning between $26 and $41 an hour, depending on experience and skill.

Union spokesman Craig Merrilees has said the two sides are very close to a deal, but has declined to say what is tying up the talks….According to employers, a major hurdle is a union demand that both sides have the ability to unilaterally remove local arbitrators at the end of a labor contract….Employers say that if such a change is made, alleged union slowdown tactics would become constant, because the union could “fire judges who rule against them.”

The union said Wednesday that employers are “grossly” mischaracterizing its current bargaining position. “It seems to us that the employers are trying to sabotage negotiations,” union President McEllrath said.

This is pretty normal, and it’s one of the things that makes it hard to unilaterally support either side in labor disputes like this. We already know that dockworkers are very well paid, and that’s apparently not a bone of contention. But what’s the deal with the arbitrators? Who has the better of the argument? There’s no telling.

The public probably doesn’t care much about this unless it eventually gets nasty enough that it affects the ability of stores to keep stuff in stock. So maybe public opinion doesn’t matter. But to the extent it does, it sure seems like unions would have a better chance of getting public support if they were more forthcoming about exactly what it is they’re holding out for.

(Or maybe not. One of the big problems with the huge decline in union density over the past few decades is that the public no longer has much of a stake in supporting unions. In the past, there was some sense of solidarity. If one union negotiated a healthy raise, it increased the odds of everyone else getting a healthy raise too. But not anymore. If the dockworkers do well, they’re just the last of the lucky bastards with good union jobs. The rest of us get nothing from it except maybe higher prices for the goods and services we buy. It’s hard to see a way out of this dynamic.)