Stephanopoulos: I’m just bringing up a question from one of your supporters talking about the bill right there. It said it would protect a Christian florist. Against 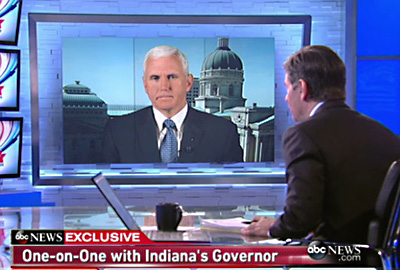 any kind of punishment. Is that true or not?

Pence: George, look….You’ve been to Indiana a bunch of times. You know it. There are no kinder, more generous, more welcoming, more hospitable people in America than in the 92 counties of Indiana. Yet, because we stepped forward for the purpose of recognizing the religious liberty rights of all the people of Indiana, of every faith, we suffer under this avalanche for the last several days of condemnation and it’s completely baseless.

Pence: George, the question here is, is if there is a government action or law that a individual believes impinges on their freedom of religion, they have the opportunity to go to court….This is not about disputes between individuals. It’s about government overreach. And I’m proud that Indiana stepped forward. And I’m working hard to clarify this.

But it turns out this isn’t quite true. Indiana’s RFRA really is different from most others. Garrett Epps explains:

The Indiana statute has two features the federal RFRA—and most state RFRAs—do not. First, the Indiana law explicitly allows any for-profit business to assert a right to “the free exercise of religion.”….What these words mean is, first, that the Indiana statute explicitly recognizes that a for-profit corporation has “free exercise” rights matching those of individuals or churches. A lot of legal thinkers thought that idea was outlandish until last year’s decision in Burwell v. Hobby Lobby Stores, in which the Court’s five conservatives interpreted the federal RFRA to give some corporate employers a religious veto over their employees’ statutory right to contraceptive coverage.

Second, the Indiana statute explicitly makes a business’s “free exercise” right a defense against a private lawsuit by another person, rather than simply against actions brought by government. Why does this matter? Well, there’s a lot of evidence that the new wave of “religious freedom” legislation was impelled, at least in part, by a panic over a New Mexico state-court decision, Elane Photography v. Willock. In that case, a same-sex couple sued a professional photography studio that refused to photograph the couple’s wedding. New Mexico law bars discrimination in “public accommodations” on the basis of sexual orientation. The studio said that New Mexico’s RFRA nonetheless barred the suit; but the state’s Supreme Court held that the RFRA did not apply “because the government is not a party.”

Remarkably enough, soon after, language found its way into the Indiana statute to make sure that no Indiana court could ever make a similar decision. Democrats also offered the Republican legislative majority a chance to amend the new act to say that it did not permit businesses to discriminate; they voted that amendment down.

Hoosiers may indeed be the kindest and most welcoming folks in the country, but that cuts no ice in court. In court, any business can claim that it’s being discriminated against if it’s forced to sell its services to a gay couple, and thanks to specific language in the Indiana statute, no court can throw out the claim on the grounds that a business is a public accommodation.

That’s different from other RFRAs, and it’s neither especially kind nor welcoming. Indiana has taken anti-gay hostility to a new and higher level, and Pence and his legislature deserve all the flack they’re getting for it. They should be ashamed of themselves.

On the other hand, if you’re thinking of running for president, I guess it’s a great entry in the base-pandering, more-conservative-than-thou sweepstakes. So at least Pence now has that going for him.