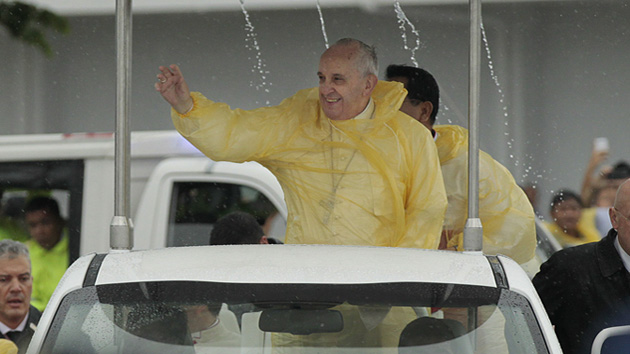 If you write about climate change for a living, you get used to being on the receiving end of tweets, emails, and comments explaining why manmade global warming is a colossal hoax. But it turns out that if you’re the pope, the trolls take things a bit further. From our partners at the Guardian:

A US activist group that has received funding from energy companies and the foundation controlled by conservative activist Charles Koch is trying to persuade the Vatican that “there is no global warming crisis” ahead of an environmental statement by Pope Francis this summer that is expected to call for strong action to combat climate change.

The Heartland Institute, a Chicago-based conservative thinktank that seeks to discredit established science on climate change, said it was sending a team of climate scientists to Rome “to inform Pope Francis of the truth about climate science.”

“Though Pope Francis’s heart is surely in the right place, he would do his flock and the world a disservice by putting his moral authority behind the United Nations’ unscientific agenda on the climate,” Joseph Bast, Heartland’s president, said in a statement.

Jim Lakely, a Heartland spokesman, said the thinktank was “working on” securing a meeting with the Vatican. “I think Catholics should examine the evidence for themselves, and understand that the Holy Father is an authority on spiritual matters, not scientific ones,” he said.

The pope and his aides have publicly embraced the scientific consensus that humans are warming the planet, and tomorrow the Vatican is putting on a summit entitled “Protect the Earth, Dignify Humanity: The Moral Dimensions of Climate Change and Sustainable Development.” Heartland beat them to the punch, setting up a “prebuttal” event on Monday in Rome. Heartland seems especially upset that the Vatican summit will feature two notable figures—UN Secretary General Ban Ki-Moon and economist Jeffrey Sachs—who, it says, “refuse to acknowledge the abundant data showing human greenhouse gas emissions are not causing a climate crisis.”

Heartland is also encouraging its followers to send letters and emails to the pope and to spread the gospel of global warming denial to their local church officials. “Talk to your minister, priest, or spiritual leader,” advises Heartland’s website. “Tell him or her you’ve studied the global warming issue and believe Pope Francis is being misled about the science and economics of the issue.”

As my colleague James West reported, a sizeable majority of US Catholics actually share the pope’s belief the climate change is a serious threat. Heartland seems to be trying to shift their views on the issue by portraying climate activists as hostile to Catholic values. In an American Spectator op-ed today (headline: “Francis Is Out of His Element”), Heartland research fellow H. Sterling Burnett writes:

Those pushing for bans on fossil fuel use think too many humans are the environmental problem. Many of them worship the creation, not the Creator. The same people pushing the pope to join the fight against climate change support forcible population control programs such as those operating in China. That is not a Christian position.

On its website, Heartland goes even further, writing that “climate alarmists have misrepresented the facts, concocted false data, and tried to shut down a reasonable, scientific debate on the issue of climate change. This conduct violates the Eighth Commandment: ‘You shall not bear false witness against your neighbor.'”