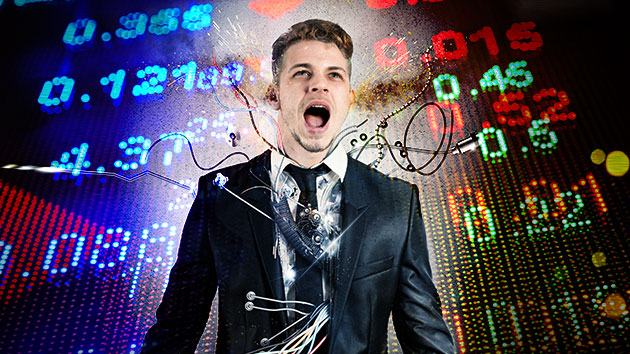 On Tuesday, the Justice Department and the Commodity Futures Trading Commission, a key Wall Street regulator, blasted out press releases declaring a great victory in their war on illegal manipulation of financial markets. The reason for the feds’ braggadocio? They think they’ve caught the guy who caused May 2010’s “flash crash,” a market seizure that vaporized a trillion dollars in shareholder value in a matter of minutes.

Federal regulators say that Navinder Singh Sarao, a 36-year-old British futures trader whose company was reportedly based in his parents’ home, illegally placed huge sell orders he never intended to complete, artificially driving down the price of a key futures contract so he could later swoop in to buy it cheaply. (This is called “spoofing” in financial jargon.) There’s one big problem, though: By charging Sarao with “contributing to the market conditions that caused” the flash crash, federal regulators are changing their story about what really happened to financial markets five years ago.

Here’s the background. In the days and weeks after the flash crash, the Securities and Exchange Commission, alongside other regulators, worked diligently to figure out what had happened. The flash crash was chaos: Liquidity evaporated, the same stocks traded at both a penny and at $100,000, and CNBC hosts freaked out even more than usual. (Prices eventually returned to normal, and the SEC canceled some of the weirdest trades.)

The flash crash was essentially over in five minutes. But it took regulators nearly five months to come up with a theory about what happened. And in late September 2010, when the SEC and the CFTC—the same agency now charging Sarao with causing the crash—released a joint report on what happened, they didn’t mention spoofing, let alone Sarao. Instead, they blamed a large trade by a firm out of Kansas City.

It’s not even clear that the feds’ new explanation is correct. As Matt Levine notes over at Bloomberg View, regulators believe that Sarao continued to place massive fake sell orders in the years after the flash crash, but somehow that activity never triggered another crisis:

If regulators think that Sarao’s behavior on May 6, 2010, caused the flash crash, and if they think he continued that behavior for much of the subsequent five years, and if that behavior was screamingly obvious, maybe they should have stopped him a little earlier?

Also, I mean, if his behavior on May 6, 2010, caused the flash crash, and if he continued it for much of the subsequent five years, why didn’t he cause, you know, a dozen flash crashes?

So I mean…maybe he didn’t cause the flash crash?

But in some ways, it doesn’t particularly matter whether regulators’ new theory is correct. What matters is that it took so long for them to develop it.

As I reported in January 2013, today’s financial markets move so fast that regulators can’t even monitor them in real time, let alone intervene if something starts to go wrong. Sophisticated trading algorithms can buy and sell financial products faster than you can blink—all without human intervention, let alone real-time human judgment. When something does go wrong, it can take months or years to figure out what happened. “A robust and defensible analysis of even a small portion of the trading day can itself take many days,” Gregg Berman, who wrote the 2010 SEC/CFTC report, told me in 2013.

Since real-time intervention by human regulators is impossible, regulators have to rely on automatic measures—fail-safes that stop trading if prices rise or fall too fast, for example. But these sorts of automatic braking systems are, by definition, designed in response to the previous crisis. “We’re always fighting the last fire,” Dave Lauer, a market technology expert who has worked for high-speed trading firms, said in 2013. As I wrote then:

Years of mistakes and bad decisions led to the 2008 collapse. But when the next crisis happens, it may not develop over months, weeks, or even days. It could take seconds.