A recent research paper suggests that the amount of time you spend actively parenting your children doesn’t really make much difference. Lots of people have cried 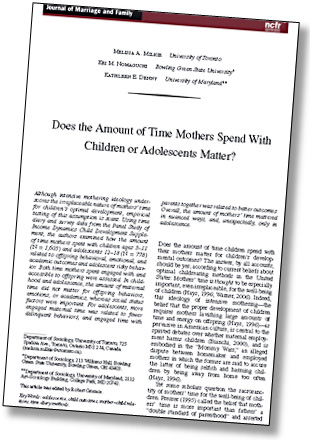 foul. Justin Wolfers is one of them:

This nonfinding largely reflects the failure of the authors to accurately measure parental input. In particular, the study does not measure how much time parents typically spend with their children. Instead, it measures how much time each parent spends with children on only two particular days — one a weekday and the other a weekend day.

The result is that whether you are categorized as an intensive or a distant parent depends largely on which days of the week you happened to be surveyed. For instance, I began this week by taking a couple of days off to travel with the children to Disneyworld. A survey asking about Sunday or Monday would categorize me as a very intense parent who spent every waking moment engaged with my children. But today, I’m back at work and am unlikely to see them until late. And so a survey asking instead about today would categorize me as an absentee parent. The reality is that neither is accurate.

This really doesn’t hold water. Sure, Justin’s Monday this week might be different from his usual Monday. But if your sample size is big enough, this all washes out in the averages. And in this case, the sample size is 1,605, which is plenty big enough to account for individuals here and there whose days are atypical for the particular week of the study. This is basic statistics.

At the risk of igniting a parenting war—and no, I don’t have children—middle-class parents tend to resolutely reject the idea that their parenting matters a lot less than they think. It’s easy to understand why, but unfortunately, there’s a considerable amount of evidence that parenting styles per se have a surprisingly small impact on the personalities and life outcomes of children. Obviously this doesn’t hold true at the extremes, but for the broad middle it does.

In a way, this shouldn’t come as a big surprise. We all know families whose children are wildly different even though they share parents and share half their genes just to make them even more similar. Is this because the children have been treated extremely differently? That’s unlikely. They’ll be treated differently to some degree—boys vs. girls, firstborns vs. middle kids, etc.—but the differences generally aren’t immense. What’s more, the differences that do exist are often reactions to the personalities of the kids themselves. A quiet child will get treated one way, while a loud, demanding child will get treated a different way. But parents shouldn’t mix cause and effect: the child’s temperament is largely driving the difference in treatment, not the other way around.

There’s a second way this shouldn’t come as a surprise: when you think about it, parenting is a surprisingly small part of a child’s upbringing. There are also peers. And school. And innate personalities. And socioeconomic status. And babysitters. And health differences. Parenting is a part of the mix, but not even the biggest part. Maybe 20 percent or so. The rest is out of your direct control.

Judith Rich Harris made this case at length in The Nurture Assumption, and it’s a controversial book. But I think she’s right on the basics. As an example, think about this: kids whose parents come from a different country generally grow up speaking English with an American accent. Why? Because they take their cues from peers, not parents. Their peers, and their interactions with peers, are more important than their parents. This means that the single biggest difference you can make is to be rich enough to afford to live in a nice neighborhood that provides nice playmates and good schools.

Now, none of is a license to ignore your kids—I’m not personally as dismissive of parenting as Harris, and it seems clear that parenting styles do have some impact—but parenting probably matters less than you think. Kids are born with personalities, and to the extent they get molded, there are lots of influences. Direct parenting styles play only a moderate role.

But my experience is that middle-class parents pretty flatly reject this idea. They simply can’t stand the idea that they’re unable to guide their kids in the direction they want. And yet, the number of kids who don’t take after their parents is enormous. Neat parents raise slobs. Quiet parents raise extroverts. Honest parents raise crooks. Pacifist parents raise Army recruits. Bohemian parents raise Wall Street analysts.

So this latest study is probably roughly right. You might not like it, but it’s probably right. And there’s good news here too: Don’t beat yourself up too badly if you think you’re blowing it as a parent. Unless you’re way off the charts, you’re probably doing OK.