I’m often amazed at the incredible memories that true political junkies have for trivial stuff that happened well over a decade ago. I was just reading a Kevin Williamson item over at The Corner, and he was noting that (a) some police organizations are apparently referring to President Obama’s new restrictions on transfer of military equipment as a “ban,” and (b) that lefties were attacking this as fear-mongering, since it 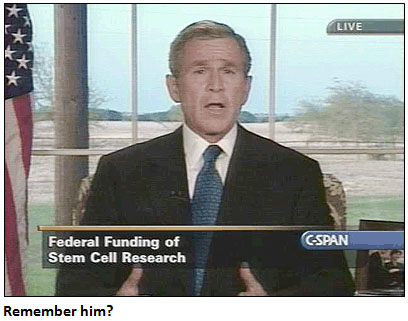 wasn’t a ban, just a restriction on how the federal government plans to spend its own money.

Where’s he going with this, I wondered. I didn’t have to wait long to find out:

Am I the only one who remembers the so-called federal ban on stem-cell research enacted by the Bush administration? That was a ban that was not, in fact, a ban at all, or even a ban on federal funding for embryonic stem-cell research, but a restriction on federal funding for research using newly created lines of embryonic stem cells. When the [Fraternal Order of Police] complains that police departments cannot use federal funds the way they did before, the Left insists that the word “ban” is inappropriate, that the complaints amount to “fear-mongering.” But Mother Jones wrote of a “Stem Cell Research Ban” under Bush, CBS News reported “Obama Ends Stem Cell Research Ban,” Wired wrote of a “Bush stem cell ban,” U.S. News and World Report wrote of “Bush’s Stem Cell Research Ban,” etc.

A funding restriction is not a ban; it isn’t now—but it wasn’t then, either. It is too much to expect even a modicum of consistency from our feckless, lollygagging media, which is mainly composed of people who were too thick for law school and too lazy to sell real estate, and certainly not from the intellectually dishonest Democratic operatives within the media (Hello, Mr. Stephanopoulos!). But we should always keep that dishonesty in mind.

I guess I take a much more easygoing attitude toward this stuff, especially when we’re talking about headlines. Heds are almost never entirely accurate thanks to space constraints, and using the word ban instead of ban on federal funding of new stem cell lines seems pretty much inevitable. As long as the hed is reasonably close to reality and a more accurate explanation is put in the first paragraph or two, I can’t get too excited.

And if it was something that happened back in 2001? I’d be racking my brains to remember what happened and whether I should still give a damn. I guess that’s what marks me as not really a true political junkie. I don’t hold grudges against the press quite long enough.