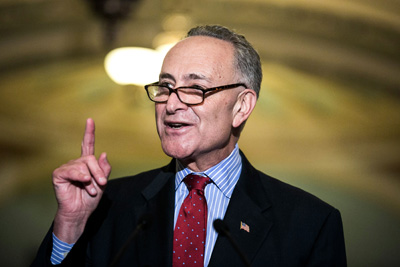 This is kind of fascinating:

After almost six months in the minority, Charles E. Schumer says Senate Democrats aren’t afraid to be obstructionists, detailing a strategy of blocking appropriations bills and other Republican agenda items until they get what they want….Schumer (D-N.Y.) said they are joining with President Barack Obama behind a plan to try to force Republicans to the negotiating table over everything from domestic and defense spending to highway funding and international tax reform.

….The White House-backed plan to get Republicans to support more spending for domestic programs by blocking floor consideration of appropriations bills was developed in a series of closed-door meetings held over the course of several weeks.

….To maintain their leverage, Democrats have decided to block all spending bills starting with the defense appropriations measure headed to the floor next week. Durbin told reporters on Tuesday that there is also no ruling out a blockade of program authorizations, like upcoming votes on highway funding.

It’s not the substance of Schumer’s comments that’s fascinating. By now, even the checkout clerks at the local Safeway know that Democrats plan to obstruct everything and anything. It’s time for Republicans to get a taste of their own dog food.

No, what’s fascinating is that Schumer is so open about it. As I recall, ever since 2009 Republicans have adamantly refused to ever publicly admit that this was their strategy.1 And there was sound thinking behind that. The rules of objective journalism prevent reporters from just flatly attributing something to a party unless they have a party leader on the record fessing up to it. So instead they have to tiptoe around the subject, or quote liberal activists accusing Republicans of obstructionism, or something like that. This leaves things a little fuzzy or “controversial” in a lot of people’s minds, which means they never really accept the whole obstructionism story. Hey, maybe each individual filibuster really is a matter of principle.

But if a party leader just comes out and admits it, then that’s that. No one will ever believe that Democrats are being principled because Schumer has already given the game away. Republicans were obstructionist, so we’re going to be too.

That’s a mistake. It may seem dumb to keep up a pretense that everyone knows is baloney, but there really is a reason for it. It won’t fool all the people all the time, but who cares? It will handcuff the press, and thereby fool some of the people some of the time. That’s worth a lot.

1This is why President Obama keeps talking about “working” with Republicans and “finding common ground” even though he knows perfectly well by now that this isn’t going to happen. He knows the press has to report it regardless of whether they think he really believes it. This means people see it on the news, and some of them will continue to believe that this is what he’s trying to do.2

2Which, admittedly, he is trying to do in a few special cases. But not many.