The LA Times complains today that President Obama left someone out when he praised Congress for reforming the Patriot Act to end the NSA’s bulk collection of telephone records:

Unacknowledged by the president was the man who can fairly be called the ultimate author of this legislation: former NSA contractor Edward Snowden, who has been charged with violating the Espionage Act and is now living in exile in Russia. Without Snowden’s unauthorized disclosures two years ago, neither the public nor many members of Congress would have known that the government, acting under a strained interpretation of the Patriot Act, was vacuuming up and storing millions of Americans’ telephone records. That program will end after a six-month transition period under the bill signed by Obama.

I don’t want to minimize Snowden’s contribution here. He exposed a vast amount of official secrecy and lying, and did it in a way that produced a lot of public attention. Whether you love him or hate him, he deserves a ton of credit for doing what he did.

But it’s been a long-running pet peeve of mine that hardly anyone ever credits the person who was really the first to expose the NSA’s bulk data collection program: Leslie Cauley of USA Today. 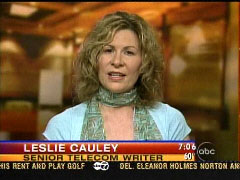 Here she is in May 2006, seven years before Snowden’s disclosures:

The National Security Agency has been secretly collecting the phone call records of tens of millions of Americans, using data provided by AT&T, Verizon and BellSouth, people with direct knowledge of the arrangement told USA TODAY. The NSA program reaches into homes and businesses across the nation by amassing information about the calls of ordinary Americans — most of whom aren’t suspected of any crime….The agency’s goal is “to create a database of every call ever made” within the nation’s borders.

….For the customers of these companies, it means that the government has detailed records of calls they made — across town or across the country — to family members, co-workers, business contacts and others….With access to records of billions of domestic calls, the NSA has gained a secret window into the communications habits of millions of Americans.

…..Among the big telecommunications companies, only Qwest has refused to help the NSA, the sources said. According to multiple sources, Qwest declined to participate because it was uneasy about the legal implications of handing over customer information to the government without warrants.

Snowden deserves credit for that—and, obviously, for providing lots of concrete evidence about the nature of the program. But when it comes to exposing the bulk collection program itself? Cauley told us all about it nearly a decade ago. She’s the one who deserves credit for making it public in the first place.