The New York Times reports that Republicans are nervous about what might happen if they win their court case to slash Obamacare subsidies in some states:

“Doing nothing is not an option,” said Senator Bill Cassidy, Republican of Louisiana….Mr. Cassidy, a physician who has provided care to uninsured patients in Louisiana’s charity hospital system, said he could easily imagine how the White House might respond: “The president brings a woman in the middle of chemotherapy up on a stage to point out 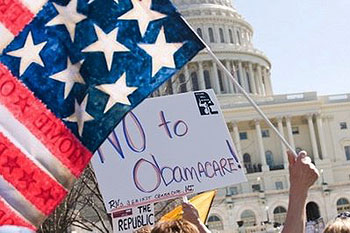 that she can no longer have her insurance because the Supreme Court struck down the subsidies.”

The consequences could be felt in statehouses and on Capitol Hill….Of the Senate seats up for election next year, 24 are held by Republicans, and 22 of those are in federal exchange states that could lose their subsidies. Asked if she hoped the court would rule for the plaintiffs, Senator Susan Collins, Republican of Maine, paused a moment, then said: “Yes, I guess I do. It would provide an opportunity to transition to a new law, or an improved version of the Affordable Care Act.” But she added, “I don’t think it would be fair to cut off people who have been using Obamacare subsidies.”

Note that Susan Collins is allegedly one of the most moderate Republicans in the Senate. Even so, she wants to win King v. Burwell. Sure, it would throw everything into chaos and cause panic for millions of people, including thousands in her own home state. Nevertheless, she’s in favor because she claims to believe it would lead to a new and better law. She of all people knows perfectly well that this is entirely chimerical, but that gives her only momentary pause. She’s still rooting for the chaos and immiseration.

If that’s how Collins feels, I can only imagine how the rest of the Republican caucus feels. They wouldn’t even experience a minor twinge about cutting off people currently using subsidies, as Collins does. They’d just be rubbing their hands in glee because a victory would be a big win against President Obama. And these days, what else matters? Cassidy may be right about the optics, but I wonder how much effect that would have on the true believers who control the Republican Party these days? Probably not much.