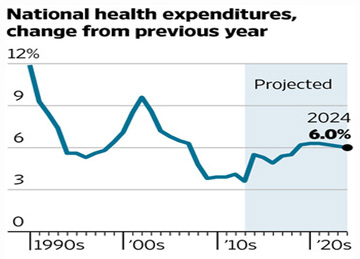 By coincidence, a new article in Health Affairs confirms an offhand guess I made a few days ago. I wrote, “I happen to think the slowdown in medical costs is real, and will continue for some time (though not at the extremely low rates of the past few years).” The Health Affairs researchers write: “Recent historically low growth rates in the use of medical goods and services, as well as medical prices, are expected to gradually increase. However, in part because of the impact of continued cost-sharing increases that are anticipated among health plans, the acceleration of these growth rates is expected to be modest.”

As the Wall Street Journal notes, this is is similar to what Medicare actuaries have been saying for a while:

The actuaries again Tuesday pointed to the stronger economy and aging population as the main factors in shaping Medicare’s future spending.

Prescription-drug spending, long a target of warnings from the insurance industry, drew particular attention from the actuaries, who pointed to a big rise in spending growth there as costly new specialty drugs such as Sovaldi, for hepatitis C, came on the market in 2014. Spending growth on pharmaceutical products jumped by 12.6% in 2014, up from 2.5% in 2013….In all, health care will comprise about a fifth of the U.S. economy by 2024, and the growth rate will exceed the expected average growth in gross domestic product by 1.1 percentage points.

So: good news or bad news? The bad news is that health care spending keeps increasing steadily. It’s currently about 17 percent of GDP and will increase to about 20 percent of GDP over the next decade. The good news is that this is slow growth: only about 1.1 percent higher than overall economic growth. Any other time in the past 30 years we would have killed for a growth rate that low.

There’s probably no way to avoid health care costs growing at least a little faster than the rest of the economy. We keep making advances, and our revealed preferences are pretty clear on at least one point: we value health care highly and are willing to pay more for it even at the expense of other items. That probably won’t be true forever, but it’s true for now.