Adam Liptak says that Reed v. Town of Gilbert is the sleeper Supreme Court case of the past year. It unanimously struck down an ordinance that discriminated against signs announcing church service times, but only three justices ruled on the basis of existing law. The other six signed an 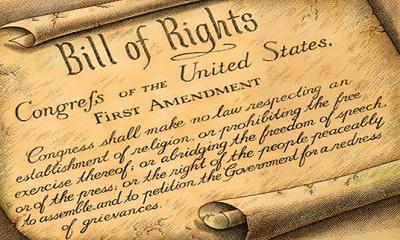 opinion that went further, ruling that many other speech regulations are now subject to “strict scrutiny.” How far will this go?

Strict scrutiny requires the government to prove that the challenged law is “narrowly tailored to serve compelling state interests.” You can stare at those words as long as you like, but here is what you need to know: Strict scrutiny, like a Civil War stomach wound, is generally fatal.

“When a court applies strict scrutiny in determining whether a law is consistent with the First Amendment,” said Mr. Abrams, who has represented The New York Times, “only the rarest statute survives the examination.”

Laws based on the content of speech, the Supreme Court has long held, must face such scrutiny. The key move in Justice Thomas’s opinion was the vast expansion of what counts as content-based. The court used to say laws were content-based if they were adopted to suppress speech with which the government disagreed.

Justice Thomas took a different approach. Any law that singles out a topic for regulation, he said, discriminates based on content and is therefore presumptively unconstitutional.

This is obviously not news to people who follow this stuff carefully, but it was news to me. Apparently the reach of Reed is pretty spectacular: three laws have been struck down by lower courts in just the past two months based on the reasoning in the case. Any law that treats, say, medical records or political robocalls or commercial speech differently from any other kind of speech is in danger—and there are a lot of statutes on the books that do exactly this.

They say that hard cases make bad law. But Reed was an easy case. It failed “the laugh test” said Elena Kagan. And yet, it seems likely to have provided an excuse for an astonishingly broad change in how speech is regulated. So far it’s stayed mostly under the radar, but eventually something bigger than panhandling or ballot selfies will get struck down, and suddenly everyone will notice what happened. What then?

Professor [Robert] Post said the majority opinion, read literally, would so destabilize First Amendment law that courts might have to start looking for alternative approaches. Perhaps courts will rethink what counts as speech, he said, or perhaps they will water down the potency of strict scrutiny.

“One or the other will have to give,” he said, “or else the scope of Reed’s application would have to be limited.”