I just finished watching the “happy hour” GOP debate—this being the name everyone has settled on as more entertaining than “the early debate” and less insulting than “kiddy table”—and it was….kinda dull. The hosts went efficiently from candidate to candidate, and they all gave their little speeches and stayed within their time limits. Nobody argued. Nobody really had any differences of opinion. It was all very polite.

So did anyone stand out? Not to me. If you’re looking for hawkish rhetoric, Lindsey Graham was clearly your man. If you like canned applause lines delivered competently, Carly Fiorina might be the evening’s winner. Aside from that, it’s hard to say that anyone did especially well or especially 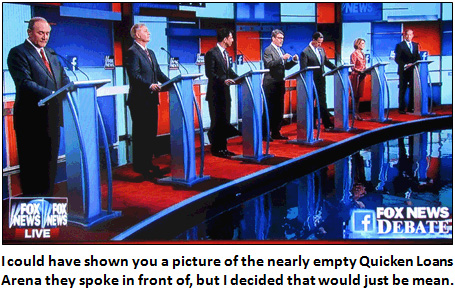 badly. However, I took notes at random, and here’s what I have for each candidate.

Rick Perry continued to be a gaffe machine. Asked about the Iran deal, he said, “$150 billion is fixin’ to go to a country that killed our Marines in Lebanon, that, uh, used their weapons to kill our young men in Iran.” I suppose he meant Iraq, right? Later he talked about his economic record in Texas over “the past eight years.” But ol’ Rick was governor for 14 years. And in his closing statement, he said, “As someone who’s worn the uniform of this country, that’s how we build our military back up.” Huh?

Earlier, I was struck by his answer on immigration: “Americans are tired of hearing ‘What are you going to do about illegal immigration?’ ” That’s not a gaffe, really, but it’s certainly a strange way to avoid answering a question. He basically went on to say that he had lots of border experience, and that’s what counts.

However, Perry also had the best line of the night—though the bar was pretty low for that. Asked for two words to describe Hillary Clinton, he answered, “Let’s go with three: Good at email.”

Lindsey Graham, as noted, was the most hawkish. Asked about ISIS, he hauled out the oldest chestnut of them all: “If we don’t stop them over there, they’re coming here just as sure as I stand here in front of you.” Asked about Planned Parenthood, he said, “You want to see a war on women, just go to Iraq and Afghanistan.” Asked about the economy, he talked about sending troops back to the Middle East and just generally kicking some major ass over there. He ended a rant against Hillary Clinton with, “If I have to monitor a mosque, I’ll monitor a mosque. She won’t.”

He also brought out some nostalgic, old-time Clinton bashing, straight from the 90s: “I’m fluent in Clinton-speak. I’ve been dealing with this crowd for 20 years….When Hillary Clinton tells you ‘I’ve given you all the emails you need,’ that means she hasn’t.”

Carly Fiorina was the first to take a shot at Donald Trump: “I didn’t get a call from Bill Clinton.” And speaking of telephone calls, she later said her first phone call from the Oval Office would be to “my good friend Bibi Netanyahu.” Booyah!

These were typical. Fiorina was very good at spouting standard GOP crowd pleasers, but I can’t remember her saying anything memorable. She delivered her lines well, but in the end, they mostly just seemed like lines.

Of course, delivering GOP applause lines well and not making any mistakes might be enough to make her the winner of the debate. It’s a GOP debate, after all. The fact that I wasn’t super impressed doesn’t mean that a conservative audience won’t be.

Rick Santorum told everyone about his new 20-20 economic plan, which features a 20 percent flat-rate tax. “It will create a manufacturing juggernaut.” Sure it will, Rick. And what does the other 20 stand for? He never told us.

He also insisted that we need work requirements and time limits not just for welfare, but for food stamps, Medicaid, and housing programs. I’m not sure if this is news or not. Has anyone else called for work requirements for Medicaid?

Bobby Jindal was reliably apocalyptic, that being his latest persona. (He ditched the “boy wonk” thing years ago.) About Obama and Hillary Clinton: “They’re working hard to change the American dream into the European nightmare. They do celebrate more dependence on the government.” He also promised not just to investigate Planned Parenthood if he wins, but to sic the IRS on them. I’m pretty sure he’s crossing a line there. He might want to check with his shadow Attorney General before saying that again.

On the Middle East, he had nothing to offer except the tired refrain that Obama can’t possibly defeat our enemies because he’s afraid to even call them by their right name. Jindal, by contrast, would have the stones to call them radical Islamist terrorists. How all this naming business would make even the tiniest difference on the ground remains a mystery.

Jim Gilmore and George Pataki apparently said nothing memorable enough for me to write down. Sorry guys! Pataki repeatedly mentioned that he was governor during 9/11, and Gilmore repeatedly checked off his resume for us. I don’t remember much else.

Executive orders are one of the GOP’s big grievances against President Obama, so all seven candidates were asked what their first executive order would be. Here are the answers from narrowest to most heroic:

Graham: the Mexico City policy on funding abortions. This gets changed every single time the White House changes parties, so it hardly counts for much. He also said he’d put the NSA back in business post haste. Surveillance for all!

Gilmore: What’s first doesn’t matter. He would look at all of Obama’s executive orders and figure out which ones we don’t need.

Santorum: “Suspend and repeal every executive order, every regulation, that costs Americans jobs.”

Fiorina: Begin by undoing all of Obama’s executive orders.

Pataki: Revoke every one of Obama’s executive orders.

Something tells me these folks aren’t really aware of how most executive orders work. Some of them really can be revoked with the stroke of a pen, but a lot of them are actually agency regulations that go through a long, long process before they get approved. If you want to revoke those, you have to go through the same process in reverse. It’s not going to happen on the first day.