I missed this when it first got published the day after the Republican debate, but Sarah Kliff says out loud something that was only percolating in the back of my head at the time:

The rhetorical shift shows a fundamental change in the calculus of Obamacare: It’s one thing to talk about dismantling a theoretical law. It’s another to take away insurance that tens of millions of Americans now receive. And that’s exactly where Republicans are in 2016. So while Obamacare barely made it onto the stage, it might just be the biggest winner of the night.

Kliff goes on to make the case in more detail that repealing Obamacare is fundamentally less attractive than it was four years ago. Back then, it was an abstraction. Today it’s a real live program with millions of enrollees.

Is this really why Obamacare got so little attention in the debate? Maybe. Or maybe Fox News just didn’t bother giving the candidates much of a chance. After all, if you’re looking for conflict, what’s the point of asking about something that every candidate on the stage agrees about? It’s worth noting that the only question specifically about Obamacare went to Donald Trump, and asked him why he had flip-flopped on single-payer health care. And the only question on Medicaid went to John Kasich, one of the few Republican governors to accept Obamacare funding to expand Medicaid coverage. In both cases there was some potential disagreement between the candidates. So Thursday’s debate might not be much of a bellwether about waning interest in Obamacare among Republicans.

Still, I suspect Kliff is onto something. I agree that an actual program with actual enrollees—and one that’s operating pretty successfully—is a trickier target than one that’s slated for the future. For one thing, you can predict anything you want about a program that hasn’t started up yet, but it’s harder to keep up the meme that Obamacare will destroy the economy when it’s pretty plainly not 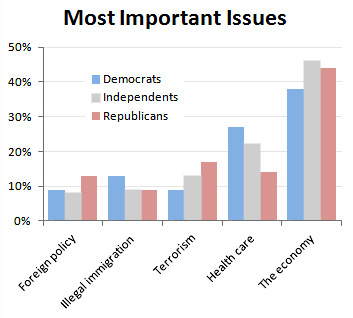 destroying the economy. For another, even a Republican candidate is going to feel a lot of pushback from constituents who are now using the program and want to know what’s going to happen if it goes away and they can’t get insured anymore.

And there’s another tidbit of evidence on this front. A couple of weeks ago CNN released a poll that asked voters what their most important issue was. Among Republicans, only 14 percent said health care. They’re far more concerned about the economy and the nexus of terrorism and foreign policy. Democrats, conversely, ranked health care very highly. This suggests that Democrats are now more committed to keeping Obamacare than Republicans are to getting rid of it.

I might be reading this wrong, and I wouldn’t want to draw any firm conclusions from a campaign that still has many months to run. Still, my sense is that Obamacare just isn’t getting as much attention from Republicans as it used to. Sure, they all want to repeal it, but their talking points are starting to sound very pro forma. Scott Walker and Jeb Bush mentioned it during the debate, for example, but only as part of a laundry list of stuff they’d do to improve the economy.

We’ll see. It will certainly get more attention during the general election, when it becomes a serious point of contention. But my guess is that it just doesn’t have the juice it used to. It’s working OK. The economy hasn’t collapsed. The budget hasn’t exploded. It’s helping actual people. And although they’ll never admit it publicly, most Republicans candidates know that repealing it takes more than the stroke of a pen. It’s a lot harder than they make it sound.