A county clerk in Kentucky who objects to same-sex marriage on religious grounds denied licenses to gay couples on Tuesday, just hours after the Supreme Court refused to support her position.

In a raucous scene in the little town of Morehead, two-same-sex couples walked into the Rowan County Courthouse, trailed by television 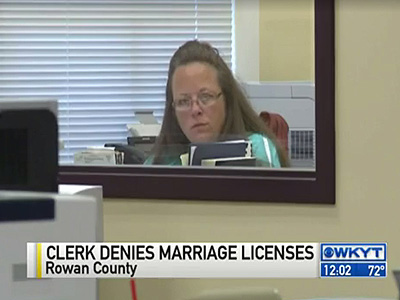 cameras and chanting protesters on both sides of the issue, only to be told by the county clerk, Kim Davis, that she was denying them marriage licenses “under the authority of God.”

The optimist in me says that if the biggest backlash to the Supreme Court’s gay marriage decision is one clerk in a tiny town in Kentucky, then we’ve gotten off pretty easy. And really, the more I think about it, that really does seem like the main takeaway from this.

But it’s obvious that the endgame here is for Kim Davis to be fired, or tossed in jail for contempt. The Supreme Court itself has ordered her to issue licenses, so she has no further legal recourse. Only recourse to God.

I’m now curious to see what the Republican field will make of this. On the one hand, most of them are treating the primary contest as a zero-sum race to see who can move furthest to the right. On the other hand, do they really want to get on the wrong side of gay marriage and immigration? On the third hand, there’s the whole rule of law thing. And on the fourth hand, Donald Trump is not an anti-gay warrior. He’s the guy everyone is responding to, so maybe that means this will stay low key.

The Huckabees and Carsons of the world will surely support Davis. The rest of the field….probably not. That’s my guess. Then again, if video of Davis being hauled off to the county pen ends up on a 24/7 loop on Fox News, who knows? Defying the will of a small group of pissed off base voters is not something the Republican field is exactly famous for.

UPDATE: Greg Sargent confirms my sense that holdouts like Davis are very rare. “In the seven southern states where the backlash might have been expected to be fiercest, only one — Alabama — still has multiple counties that are holding out. One other — Kentucky — has only two remaining counties holding out.” The national campaign director for Freedom to Marry says that, all things considered, “things are going exceedingly smoothly.”