Over at PostEverything, Dan Drezner wonders why economics has managed to wield such an outsized influence among the social sciences. His strongest point—or at least the one he spends the most time on—is that economists “share a strong consensus about the virtues of free markets, free trade, capital mobility and entrepreneurialism.” This makes them catnip to the plutocrat class, and therefore the favored social scientists of influential people everywhere.

Fine, says Adam Ozimek, but what about liberal economists? “Why is Paul Krugman famous? Robert Shiller? Joe Stiglitz? Jeff Sachs? ‘To please plutocrats’ is not a good theory.” And this: “Why do liberal think tanks with liberal donors supporting liberal 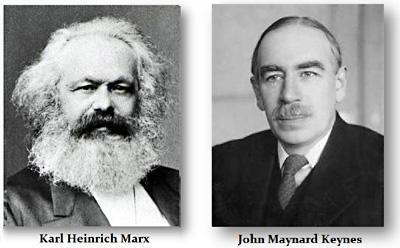 causes hire so many economists? To please plutocrats?”

I think Drezner and Ozimek each make good points. Here’s my amateur historical explanation that incorporates both.

The first thing to understand is that in the 19th century, economists were no more influential than other social scientists. Folks like David Ricardo and Thomas Malthus were certainly prominent, but no more so than, say, Herbert Spencer or Max Weber. What’s more, economics was a far less specialized field then. John Stuart Mill had a strong influence on economics, but was he an economist? Or a philosopher? Or a political scientist? He was all of those things.

So what happened to make economists so singularly influential in the 20th century? I’ll toss out two causes: Karl Marx and John Maynard Keynes.

The fight for and against communism defined the second half of the 20th century, and Marx had always identified economics as the underpinning of his socio-historical theories. Outside of the battlefield, then, this made the most important conflict of the time fundamentally a fight over economics. In the public imagination, if not within the field itself, the fight between communism and free markets became identified as the face of economics, and this made it the most important branch of the social sciences.

Then Keynes upped the ante. In the same spirit that Whitehead called philosophy a series of footnotes to Plato, economics in the second half of the 20th century was largely a series of footnotes to Keynes. Rightly or wrongly, he became the poster child for liberals who wanted to justify their belief in an activist government and the arch nemesis of conservatives who wanted no such thing. In the same way that communism was the biggest fight on the global stage, the fight over the size and scope of government was the biggest fight on the domestic stage. And since this was fundamentally a fight over economics, the field of economics became ground zero for domestic politics in advanced economies around the world.

And that’s why economists became so influential among both plutocrats and the lefty masses. Sure, it’s partly because economists use lots of Greek letters and act like physicists, but mostly it’s because that window dressing was used in service of the two most fundamental geo-socio-political conflicts of the late 20th century.

So does that mean economics is likely to lose influence in the future? After all, free market capitalism and mixed economies are now triumphant. Compared to the 20th century, we’re now arguing over relative table scraps. And, as Drezner points out, the profession of economics has hardly covered itself with glory in the opening years of the 21st century. Has their time has come and gone?

Maybe. I mean, how should I know? Obviously there’s a lot of inertia here, and economics will remain pretty important for a long time. But the biggest fights are gone and economists have an embarrassing recent track record of failure. If the rest of the social sciences want to mount an assault on the field, this would probably be a pretty good time to do it.