Tom Friedman gets it right on Syria:

Today’s reigning cliché is that the wily fox, President Vladimir Putin of Russia, has once again outmaneuvered the flat-footed Americans, by deploying some troops, planes and tanks to Syria to buttress the regime of President Bashar al-Assad and to fight the Islamic State forces threatening him. If only we had a president who was so daring, so tough, so smart.

Yep. Charles Krauthammer, for example, is nonplussed. “What’s also unprecedented is the utter passivity of the United States,” he said yesterday. “The real story this week is what 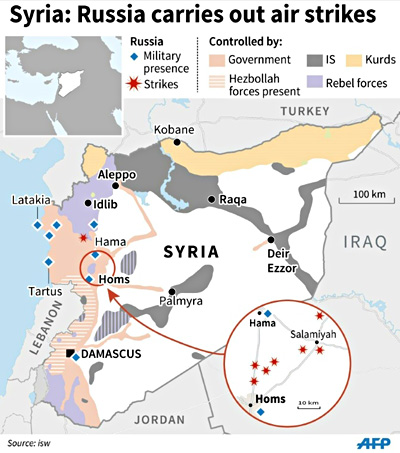 happened at the U.N., where Putin essentially stepped in and took over Syria. He’s now the leader.” And here’s another Republican on the same theme:

Sen. Bob Corker (R-Tenn.) says Russian President Vladimir Putin is escalating his support for the Assad regime in Syria because he thinks the Obama administration won’t stop him. “He sees no pushback, no price to pay,” said Corker, the chairman of the Senate Foreign Relations Committee, at the Washington Ideas Forum on Wednesday. “What he’s doing is raising popularity in his country.”

….The Foreign Relations chairman also criticized the Obama administration for missing opportunities in Syria, citing the decision to pull back from its redline after the regime used chemical weapons.

“We have missed opportunities,” he said….”That could have really changed the momentum at a time when we really did have a moderate opposition. “By us not taking that action, it took the wind out of their sails,” he said. “That was the biggest moment of opportunity … and that was mishandled.”

This has become almost pathological. Every time Putin does something, Republicans start wailing about how he’s taking charge, showing what a real leader does while Obama meekly sits back and does nothing. They assume that military action always shows strength, while avoiding military action always shows weakness. That’s just crazy. Let’s take a quick survey of the real situation here:

Syria is the last ally Russia has left in the Middle East. Putin didn’t suddenly increase his military support of Assad as a show of brilliant grand strategy. He did it because he was in danger of losing his very last client state in the Middle East. This is a desperate gamble to hold on to at least a few shreds of influence there.

Fred Kaplan: “In the past decade, Russia has lost erstwhile footholds in Libya and Iraq, failed in its attempt to regain Egypt as an ally….and would have lost Syria as well except for its supply of arms and advisers to Assad….Syria is just one of two countries outside the former Soviet Union where Russia has a military base….His annexation of Crimea has proved a financial drain. His incursion into eastern Ukraine (where many ethnic Russians would welcome re-absorption into the Motherland) has stalled after a thin slice was taken at the cost of 3,000 soldiers. His plan for a Eurasian Economic Union, to counter the influence of the west’s European Union, has failed to materialize. His energy deal with China, designed to counter the west’s sanctions against Russian companies, has collapsed.

Intervention is unpopular with Russians. Corker is dead wrong about Putin doing this to curry favor with the public. On the contrary, they don’t care about Syria and are reluctant to lose any lives helping Assad. Putin is assisting Assad despite the domestic difficulties it will create for him, not because he expects the Russian masses to rally to the flag.

Andrew Rettman: “Philip Breedlove, Nato’s top military commander, believes the Latakia build-up has nothing to do with counter-terrorism….’As we see the very capable air defence [systems] beginning to show up in Syria, we’re a little worried about another A2/AD bubble being created in the eastern Mediterranean,’ he said.

‘These very sophisticated air defence capabilities are not about [IS], they’re about something else … high on Mr. Putin’s list in Syria is preserving the regime against those that are putting pressure on the regime.'”

The benefits of getting further entangled in Syria are….what? Russia may be concerned about Syria becoming a breeding ground for terrorists who then make their way up to Russia. But that’s about it. Putin isn’t going to win Syria’s civil war, and Assad will become a bottomless pit of demands for more military support. Aside from winning the admiration of American conservatives, it’s hard to see Putin getting anything of real worth out of this.

The same is true of the United States. There has never been a cohesive “moderate opposition” that would have ousted Assad if only we had supported them earlier. Republicans keep repeating this myth, but when they had a chance to support strikes on Syria in 2013, they didn’t do it. That shows about how much they really believe this. Nor has there ever been a chance that the United States could topple Assad short of committing tens of thousands of ground troops, something that nobody support. “Arming the opposition” is the last refuge of hawkish dead-enders: something that sounds tough but rarely has much effect. You mostly hear it from people who don’t have the courage to recommend ground troops but are desperate to sound like they’re backing serious action.

The United States doesn’t have the power to fix the Middle East. We can nudge here and there, but that’s about all. As Friedman says, Obama may have caused some of his own problems by talking a bigger game than he’s willing to play, but he’s still right not to play. If Vladimir Putin is so afraid of losing his last foothold in the Middle East that he’s willing to make a reckless and expensive gamble in the Syrian quagmire, let him. It’s an act of peevishness and fear, not of brilliant geopolitical gamesmanship. For ourselves, the better part of wisdom is to stay out. Modest action would be useless, and our national interest simply isn’t strong enough to justify a major intervention. Like it or not, war is not always the answer.