Here is Ben Carson on Wednesday:

At a campaign event in New Hampshire, Carson noted that many people believe a situation like what took place in Germany in the 1930’s and 1940’s could never happen in America. “I beg to differ,” Carson said. “If you go back and look at the history of the world, tyranny and despotism and how it starts, it has a lot to do with control of thought and control of speech.”

At a press conference after the speech, reporters asked Carson who he thinks is like Adolf Hitler in the U.S. “I’m not going to go into that that. I think that example is pretty clear,” he responded, without elaborating.

Carson hastened to add that he wasn’t referring to Barack Obama. No siree. Someone else. But not Obama. Wink wink nudge nudge.

In any case, this provides a good opportunity to highlight Carson’s views on political correctness. When Donald Trump talks about it, he’s using it in the usual throwaway sense we’re all familiar with. He wants to be able to talk about 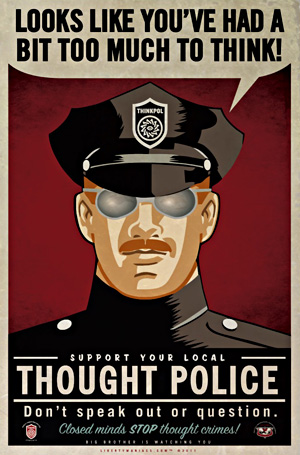 immigrants being rapists or women being shrill and ugly without everyone getting on his case. Others have in mind trigger warnings and other campus fads. But when Ben Carson talks about it, he means much, much more. It is the core of his worldview, so it’s worth understanding what he means by it. Here is Amy Davidson:

In his most recent book, “One America,” he writes that agents working against this country’s greatness include the political-correctness police, who use “faux hypersensitivity” to take power away from the majority of Americans….Political correctness, Carson says, is used to keep conservatives from invoking slavery or Nazism, both of which he cites freely. (“Obamacare is really, I think, the worst thing that has happened in this nation since slavery”; “We live in a Gestapo age.”)

He wonders if Obama will cause the elections to be cancelled: “He’s sitting there saying, ‘These Americans are so stupid I can tell them anything.’ ” Trump, the businessman, tells Americans how the financial system is rigged against them. Carson, the brain surgeon, tells them how they are being denied knowledge.

This explains why, at the New Hampshire event, he’s talking about “control of thought and control of speech” for seemingly no reason. In fact, Carson believes that liberals are deliberately making it impossible for conservatives to talk about the truly important issues that are destroying America. Keeping everyone cowed and silent is the first step to tyranny, which is why he thinks incipient Hitlerism is something to be taken seriously. Here he is explaining this view last year, before he was running for president:

Political correctness is antithetical to our founding principles of freedom of speech and freedom of expression. Its most powerful tool is intimidation. If it is not vigorously opposed, its proponents win by default, because the victims adopt a “go along to get along” attitude. Major allies in the imposition of PC are members of the media, some of whom thrive on controversy and others who are true ideologues.

….The American people must learn to identify and ignore political correctness if we are to escape the bitter ideological grenades that are destroying our unity and strength. Political correctness is impotent if we the people are fearless. Let us emphasize intelligent discussion of issues and leave the smear campaigns to those with no constructive ideas.

Carson talks incessantly about political correctness, and he’s been doing it for a long time. It is, he believes, the method by which the populace is kept too intimidated to object when liberal policies lead to moral decay and the eventual downfall of the country. You will hear him talk all the time about not being afraid to speak up, and when he does it’s more than just a normal political stemwinder urging people to get involved and vote. He believes that political correctness today is the equivalent of brownshirt terrorism in 1933, and he believes that this is what brought Hitler to power in Germany. Whenever you hear Carson talk about either “political correctness” or “mind control,” this is what it means to him.