The LA Times writes today about Russia’s intervention in Syria:

The outcome of Vladimir Putin’s bold military gamble in Syria is far from clear, but in the short term, one loser seems certain: President Obama.

….The White House has been poised for weeks to quietly shift more U.S. military support to seasoned Kurdish militias and other rebel fighters in northern Syria. But at this point, any change in policy will appear to be in response to 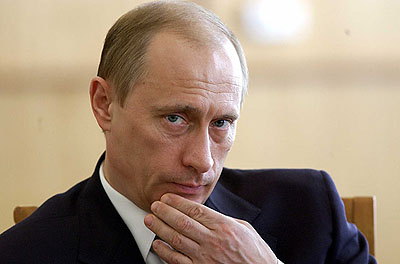 Putin’s muscular moves, not a new initiative to help solve the multi-sided conflict.

Putin is “bold” and “muscular.” Obama is a “loser.” Well, this piece is labeled as analysis, so I guess that’s fair enough. But I hope that future articles continue to report the reality—that Obama has been planning for a while to shift his strategy in Syria—rather than merely parroting the tired judgment that he “appears” to be responding to the muscular Putin. In any case, let’s continue:

Middle Eastern allies who have chafed at Washington’s reluctance to plunge into the 4-year-old civil war have been impressed by how the Russian president has come to an ally’s defense, even if they don’t like his goals or his ally, Arab officials say.

Seriously? Sure, many of our Arab allies have been urging us for a long time to be more militantly anti-Assad. But are they really impressed by Putin’s actions? He’s allowed his “ally” Assad to twist in the wind with no apparent concern at all since 2011, and then after four years he finally enters the conflict in a small way—mainly because he was about to lose Assad for good. So far, he’s launched a few air sorties and some cruise missiles. Are our Arab allies really that easily impressed? Onward:

From the White House’s perspective, the problem is not only that Russia is propping up a leader who they insist must step down as a part of a political deal to end the bloodletting. It is also that Putin’s moves seem aimed at emphasizing American hesitation and signaling a lack of respect for the former Cold War foe.

….Over the last week, Moscow has seemed indifferent to the risk of a confrontation with Washington as Russian forces repeatedly attacked Syrian rebels armed by the CIA and allied spy services.

Once again, Putin is the Donald Trump of world leaders: lots of showmanship and media attention for a very small price. It’s impressive in a way. But the simple fact remains: Putin hasn’t really done very much, and the fact that his Syria offensive seems aimed mostly at tweaking Obama is a show of childishness not strength. On Wednesday he even boasted that Russia’s cruise missiles “hit all the targets,” something the US hardly needs to bother with since everyone already knows we have plenty of cruise missiles that have a long history of hitting their targets.

Finally, we end with this:

Putin’s gamble may accomplish several of his goals: increasing Russian influence in the Middle East and on the world stage, building his image at home, and shifting Western attention from his intervention in Ukraine.

But many analysts believe that neither Putin nor anyone else can wrest military victory from the bitter cauldron in Syria. And many expect Obama, who has made that argument since the conflict began in 2011, to continue to move cautiously. Obama “has been pretty good about resisting pressure to get in deeper,” said Kupchan. “I don’t think he’s going to react to Putin’s gambit by upping the ante.”

Maybe we should have started with that? Putin is essentially engaged in a PR campaign. Obama isn’t taking the bait because he knows perfectly well it’s a fool’s errand. I hope everyone in Washington keeps that firmly in mind as Putin continues his Trump-esque rampage across the media landscape.