One of Josh Marshall’s readers says something this morning that I’ve been meaning to say but haven’t gotten around to. It’s about the Russian airstrikes in Syria:

First, the actual deployment is very small. In terms of the airwing, it is roughly the equivalent of what the non-U.S. coalition members have flying over Iraq and Syria, keeping in mind that the U.S. is still flying the majority of sorties now. The Russians are armed with non-precision munitions, meaning the likelihood of civilian casualties is high.

….Moreover, anyone who has been following Russia’s military modernization program closely over the past five years or so knows that the Russian military is unlikely to be able to sustain this kind of deployment in the long run….This means that over time, the mission is unlikely to accomplish much more than propping up Assad and preventing his collapse, which appeared imminent and explains the rapidity of the deployment.

….When it comes to formulating a U.S. response to this new development, time is the biggest advantage we have. The shine will soon wear off of Putin’s move. It looks bold and confident now, but it is actually a bluff and in part a diversionary one at that….The U.S. bargaining position will be much stronger when Putin’s gambit is revealed to be the empty bluff it is.

I’d make a broader point. Like clockwork, every time another country hauls out its military—the Egyptian airstrikes in Libya, Jordan’s airstrikes against ISIS—American conservatives go wild. Why can’t Obama commit to that kind of serious action? But also like clockwork, this routinely ignores the fact that (a) the military action they’re admiring is pretty small, and (b) Obama is already doing the same thing on a much bigger scale.

Yes, yes, I know: we should arm the Syrian opposition. Spare me. That empty shibboleth aside, we’re already bombing Syria. We’re already bombing ISIS in Iraq. We already have thousands of boots on the ground. We’ve already put together an international coalition. We’re doing ten times what Putin is doing and we’ve been doing it for over a year. If you have serious criticisms of the tactics we’re using, fine. But Vladimir Putin is the Donald Trump of world leaders: he gets swooning admiration from conservatives because he knows how to play the media. I sort of admire the bang for the buck he gets on the world stage from his flamboyant gestures, but that’s about it. He’s entered the Syrian conflict in a small way, four years after it began, and only because he was in danger of losing his last tenuous toehold in the Middle East. And for that he gets 24/7 coverage on Fox and CNN.

Do you know how many military bases the US has in the Middle East? Nearly two dozen. Plus the Sixth Fleet in the Mediterranean and the Fifth Fleet in the Persian Gulf. Plus a whole bunch of close allies. And we’re supposed to be quaking in our boots because Putin hastily upgraded a single aging base in Latakia under pressure from his sole remaining ally? You’re kidding, right? 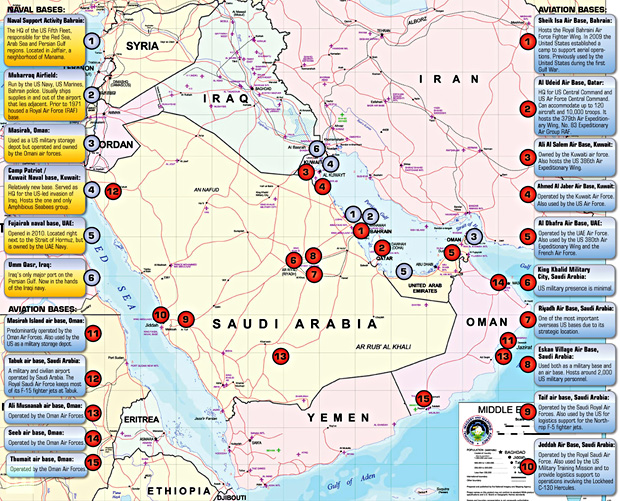