Ed Kilgore notes this morning that “the media appetite for naming a clear winner has fed a post-debate trend towards labeling HRC as a gigantic, titanic, overwhelming cham-peen.” True enough, and you can blame that on a sort of self-feeding bandwagon loop among the campaign press. Still, in this case I think it’s probably justified. Sure, O’Malley did OK, and so did Sanders, but let’s face it: Nobody cares much about O’Malley, and Sanders probably didn’t change the dynamics of the race in his favor despite a decent performance. What’s more, my own personal reaction is that Sanders made it even clearer than ever that he doesn’t really want to be president. He just wants to move the race to the left.

But the fact that Hillary did well really does matter. She showed Democrats why they’ve always liked her in the past. She showed off her debating skills. She put to rest all the Benghazi/email nonsense. She almost certainly halted her slide 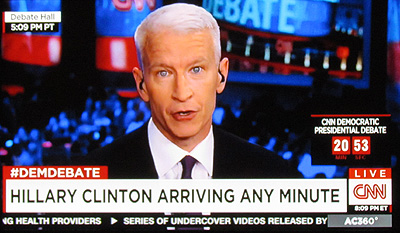 in the polls. She basically made herself the inevitable winner yet again. Plus this:

And that leads to the aspect of the debate that struck me apparently more than most observers: the exceptional hostility of the questioning from moderator Anderson Cooper, who seemed to be trying to defy expectations that he’d be less savage than Jake Tapper was in CNN’s GOP debate. Pretty quickly, Cooper became a stand-in for all the media folk trying to make the Democratic contest about emails and Benghazi! and “socialism,” and you got the sense the candidates and the immediate audience united in disdain for the superficiality of where the hosts wanted the discussion to go. The feral roar that greeted Bernie Sanders’ statement that Americans were tired of “hearing about [Clinton’s] damn emails”—followed by HRC shaking Bernie’s hand—was the signature moment of the night. And this wasn’t just some “gift” from Sanders to Clinton, as it was called by several talking heads last night. It was a party-wide rebuke to the MSM for how they are covering this campaign.

I didn’t get the sense that Cooper was especially hostile. But Kilgore is right that debate moderators generally try to focus on superficial “toughness” instead of asking either genuinely tough questions or genuinely interesting policy questions. In a way, this is justified: you don’t want candidates to get away with just making stump speeches. You want to challenge them. You want to see how they perform under pressure. Unfortunately, when you take this too far it becomes obvious that you’re just desperately trying to gin up controversy for its own sake. Debate moderators need to understand that the show isn’t about them. It’s about genuinely digging out answers from candidates on subjects they might prefer to fudge. That’s genuine toughness. But that takes a deep knowledge of policy and the willingness to engage with it. That’s too often missing from these events.