I’m currently at my local infusion center getting my bones strengthened, but the miracle of modern technology means that I can blog even with an IV drip in my arm. Besides, it’s only my left arm, and who needs that?

Anyway, today’s subject is the SAFE Act. Congress has already passed two SAFE Acts and considered two more over the past couple of decades, so apparently it’s a pretty popular acronym. This time around it stands for the American Security Against Foreign Enemies Act, and it’s a strange beast. It’s designed to show that Congress is responding to the alleged threat from Syrian refugees, but it actually does nothing much at all. Vetting doesn’t change, 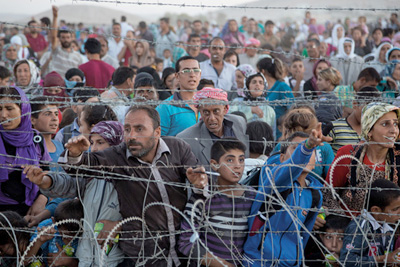 procedures don’t change, and no limits are placed on the number of refugees we can accept. All it does is require the administration to formally certify the procedures already in place—and force three top officials to personally sign off on every Syrian or Iraqi refugee.

In other words, it’s basically a fraud. It will create a short pause in the refugee program while some poor schmoe who draws the short straw goes through the makework of drafting the “certification” procedure and getting it approved, and that’s about it.

President Obama has threatened to veto the bill, and Democratic leaders in Congress are opposed to it. Nonetheless, nearly 50 Dems voted for it in the House today. Depending on your tolerance for such things, they’re either cowards or pragmatists. The Senate won’t even take up the bill until December, and there’s a good chance that refugee hysteria will have died down by then. So it may never even make it to the president’s desk.

So what to think about this? I’d say you could reasonably look at it two ways:

Really it’s both. It’s cowardly for sure. On the other hand, refugees are the latest excuse for shutting down the government in a few weeks, and a bit of cheap symbolism might be a small price to pay for removing it. I wouldn’t vote for this bill, and I certainly wouldn’t speak in favor of a “pause” if I were part of the Democratic leadership team (lookin’ at you, Chuck). But I also might decide it’s not a hill to die for. Sometimes that’s just how politics works.