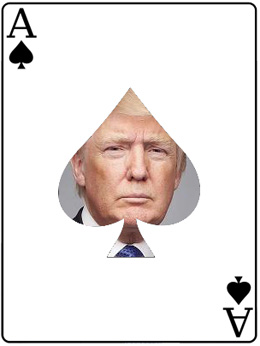 Here’s the latest on GOP panic over the possibility that Donald Trump might actually win the Republican nomination:

A well-connected GOP operative is planning a “guerrilla campaign” backed by secret donors to “defeat and destroy” the celebrity businessman’s candidacy, according to a memo reviewed by The Wall Street Journal.

….The most concerted effort is Trump Card LLC, the self-styled guerrilla campaign being launched by Liz Mair, the former online communications director of the Republican National Committee. “In the absence of our efforts, Trump is exceedingly unlikely to implode or be forced out of the race,” according to the Trump Card memo. “The stark reality is that unless something dramatic and unconventional is done, Trump will be the Republican nominee and Hillary Clinton will become president.”

….Ms. Mair, who has ties to the libertarian movement and the GOP establishment, said that donors backing Texas Sen. Ted Cruz, Mr. Kasich and Mr. Bush are interested, and that some worry that going public could hurt their candidate.

Rick Wilson, a Republican media consultant, said in an interview that he is prepared to make ads for the new group. Mr. Wilson isn’t involved in fundraising but predicted that a number of Republican donors will start bankrolling an anti-Trump effort.

Look, folks: the first rule of fight club is that you don’t talk about fight club. What’s the point of publicly announcing this strategy? It’s good for the ego, I suppose, but all it does is alert Trump and ruin any jolt of surprise you might get from your campaign. Now reporters are all ready for it, and when it happens they’ll just dissect it dispassionately instead of (hopefully) being dazzled. It’s like the idiots in the Hillary Clinton campaign who decided to alert the world that they planned a campaign to make Hillary look more human. Nice going.

As with most liberals, I’m of two minds about all this. On the one hand, Republicans deserve every bit of what they’re getting. For years they’ve been actively encouraging the enraged, racially-charged grievance culture that Trump represents, and it’s hard to feel sorry for them now that it’s biting them in the ass. Besides, if Trump does win the nomination, he’s almost certain to lose, and that’s fine with me. Republicans deserve another few years out in the cold.

On the other hand, life is strange, and “almost certain” is not “certain.” What’s more, we’re now at the point where Trump is no longer a joke. Another year of his unapologetic racism and xenophobia could do serious damage to the country—and especially to the targets of his malignant rants. It’s long past time to dump him on the nearest ash heap of history.