Dana Milbank was unimpressed by the contrast Barack Obama made yesterday during his press conference with French president François Hollande. Hollande was animated and can-do about destroying 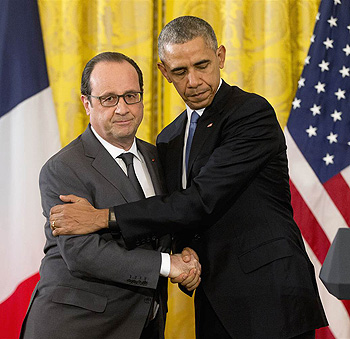 Tough talk won’t defeat terrorists — but it will rally a nation. It’s no mere coincidence that the unpopular Hollande’s support has increased during his forceful response to the attacks, while Obama’s poll numbers are down.

The importance of language was very clear at the White House on Tuesday, even in translation. There was little difference in their strategies for fighting the Islamic State, but Hollande was upbeat and can-do, while Obama was discouraging and lawyerly. It was as if the smoke-’em-out spirit of George W. Bush had been transplanted into the body of a short, pudgy, bespectacled French socialist with wrinkled suit-pants.

….Hollande spoke of a new era. “There is a new mind-set now,” Hollande said. “And those who believed that we could wait” now realize “the risk is everywhere . . . . We, therefore, must act.”

Then came President Oh-bummer. “Syria has broken down,” he said. “And it is going to be a difficult, long, methodical process to bring back together various factions within Syria to maintain a Syrian state.”

Maybe you can motivate people when you sound so discouraging. But it’s hard.

Aside from the fact that Milbank is cherry picking a bit here, I think he misses a few things. First is the most obvious: France is the country that was just attacked. Of course its president is the more emotional one. Hollande would seem more emotional than pretty much anyone he was paired up with. Have you ever seen Angela Merkel at a press conference?

Third and most important: Obama isn’t trying to rally a nation. Just the opposite, maybe. He’s been down this road before, and he’s well aware that revving up the public for a splendid little war requires no effort at all—especially during campaign season. When reporters demand to know why we can’t just “take out the bastards,” it’s obvious that Obama has a different job than Hollande. He’s not trying to rally a nation, he’s trying to keep everyone grounded about exactly what we can do. And for that I say: good for him. It’s harder and less satisfying than preaching fire and brimstone, but in the long run it’s better for the country.