The latest on Syria: 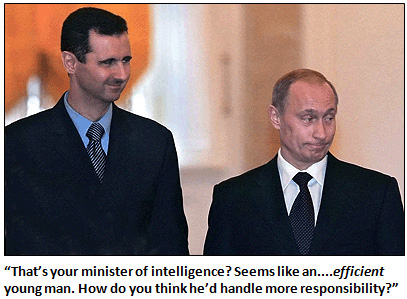 and Iranian delegations in Vienna regarding the fate of Assad.

“Russia is dealing with the [question of] the fate of the presidency in Syria from the point of view of the legitimacy of the regime. In that sense it is not insisting on particular people; it is more concerned that any transition in governance must follow international protocols and laws,” the source, who requested anonymity because they were not authorized to speak to the media, said.

“Iran, on the other hand, is very insistent on Assad himself . . . because it fears losing its influence in Syria if [his] regime is removed.”

Is this true? Does it matter? I don’t know. I do know that I probably don’t want the United States getting into the middle of this.

Also: if I were Assad, this might make me a wee bit nervous about my partner-in-arms, Vladimir Putin. I figure Putin is helping out Syria to (a) test his military in live combat, (b) give the United States a poke in the eye, and (c) keep things quiet along his southern border. None of those things really require Assad at the helm. If someone better comes along, that might be the end of a beautiful friendship.