I’m not sure why Josh Marshall decided to write about the Case/Deaton mortality study today, but he did. Here’s what he says:

They made a startling discovery. As you would expect, every age and ethnic/racial grouping has continued to see a steady reduction of morbidity (disease) and increase in lifespans for decades. But there’s one major exception: middle aged (45-54) white people. Since roughly 1998, disease and death rates for middle aged white men and women has begun to rise.

….We might assume that a middle aged population group, under some mix of economic and societal stress, would be hit by the classic diseases of life stress: heart disease, cancer, diabetes, etc. But that’s not it. These people are quite simply killing themselves — either directly or indirectly. According to Case and Deaton’s study, the reversal in the overall mortality trend is driven by three causes: drug and alcohol poisonings, suicide and chronic liver disease. In other words, either literal suicide 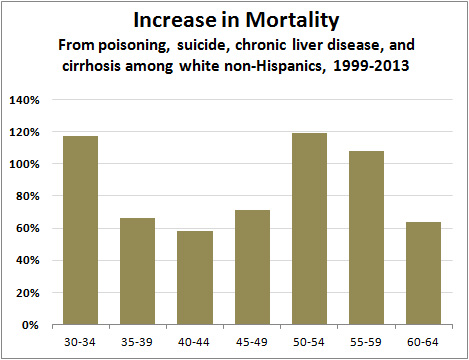 or the slow motion suicide of chronic substance abuse.

I don’t really blame Marshall for saying this, since Case and Deaton go to considerable lengths to focus on this age group. But it’s just not true. Their own data shows that every white age group has seen a big increase in mortality from suicide/alcohol/drugs. I’ve tried to make this clear before, but I’ll try again today with a brand new chart. This is based on Figure 4 from the Case/Deaton paper and it shows the increase in mortality for all age groups.

So why did Case and Deaton focus on the 45-54 age group? They explain it themselves:

The focus of this paper is on changes in mortality and morbidity
for those aged 45–54. However, as Fig. 4 makes clear, all 5-y age
groups between 30–34 and 60–64 have witnessed marked and similar increases in mortality from the sum of drug and alcohol poisoning, suicide, and chronic liver disease and cirrhosis over the period 1999–2013; the midlife group is different only in that the sum of these deaths is large enough that the common growth rate changes the direction of all-cause mortality.

That’s it. The 45-54 group doesn’t have the largest increase in death from suicide/alcohol/drugs. The only thing that makes them different is that the increase in these deaths “changes the direction of all-case mortality.” In other words, their line on the chart went from sloping up to sloping down. That’s the only reason to focus on them: because they crossed the zero line.

But that’s purely esthetic. If, say, the mortality rate of one group goes from -3 percent to -1 percent, and the other goes from -1 percent to +1 percent, they’ve both changed by two percentage points. The latter one, however, goes from negative to positive, and that makes for a dramatic chart. But that’s all it does.

I wouldn’t care so much about this except that people are drawing a lot of conclusions about “what’s wrong with middle-aged whites?” without noticing that the answer might very well be “nothing.” A better question is, “what’s wrong with America?” As Case and Deaton show, the mortality of middle-aged US whites did indeed start increasing around 1999, while the mortality rate in other advanced countries continued to decline steadily. I’d like to see that chart for all age groups before I tried to draw any conclusions, but it sure seems like we should be focusing on this, not on middle age. It’s not clear that middle age really has much to do with any of this.