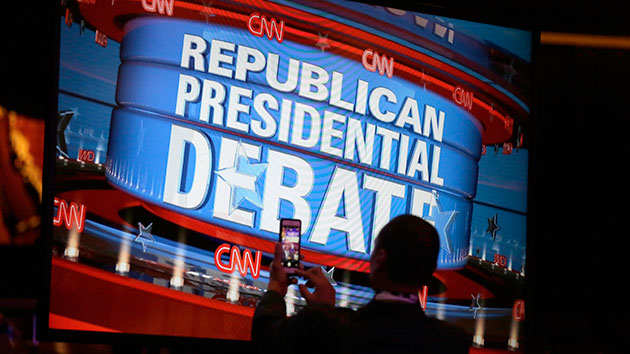 A member of the media makes a photo of the debate stage before the start of the CNN Republican presidential debate at the Venetian Hotel & Casino in Las Vegas.Chris Carlson/AP

This debate was a mess. I seriously wonder whether ordinary viewers were able to follow much of it at all. It left me with the impression of a bunch of super macho monks angrily arguing about angels on the head of a pin. The candidates went down a rabbit hole early on and never really came up for air.

My strongest impression is that Ben Carson was terrible. He really needed to show that he wasn’t a complete nitwit on national security, and he failed spectacularly. He was obviously out of his depth and had no clue how to answer even the simplest questions. He literally froze when Wolf Blitzer asked him his view of the USA Freedom Act. It was almost painful to watch. Later on he burbled about not being able to fix the Middle East, sending Syrian refugees back to Syria with a few defensive weapons, and then became completely incoherent when asked about North Korea. Carson did so badly that I think his campaign is over.

Donald Trump took a step backward to his persona from the first debate: lots of mugging for the camera and no apparent policy knowledge at all. He doubled down on killing the families of terrorists; he answered three or four different questions by saying he opposed the invasion of Iraq; and then produced one of the night’s most fatuous lines: “I think for me, nuclear, the power, the devastation, is very important to me.” That’s his position on the nuclear triad? It’s hard to believe this isn’t going to hurt him in the polls, but this is not a normal world we live in these days. I’d say he’s going to lose a few points, but I won’t pretend to be confident about that.

Jeb Bush tried manfully to needle Trump, but the poor guy just can’t pull it off. All Trump had to do was make a face at him. As for substance, he was one of the most reasonable guys on the stage, but he seems incapable of stating his views in any kind of memorable way. He did nothing to help himself tonight.

Marco Rubio did his usual thing: he produced tight little canned responses to every question. I don’t like this approach, but I suppose it sounds coherent and forceful to some people. He did OK, and might pick up a few points. However, I would like to hear more about whether he thinks Ted Cruz exposed national secrets on live TV.

Ted Cruz probably did well, though he struggled with several questions. Does he really think we can carpet bomb only “the bad guys” and no one else? Does he really think arming the Kurds is the key to defeating ISIS? They aren’t going to fight ISIS anywhere outside Kurdistan. But I doubt this kind of stuff does him much harm. His tedious manhood fight with Wolf Blitzer over being allowed to speak when it wasn’t his turn didn’t make him look especially presidential, but maybe that doesn’t matter either. My sense is that he came out about even tonight.

Chris Christie said nothing except that he’s tough. Carly Fiorina just spouted her usual one-liners. John Kasich desperately wants people to pay attention to him and just can’t pull it off. And Rand Paul, bless his heart, didn’t try to out-macho everyone. But he also probably didn’t appeal to anyone either.

It’s hard to know how to react to this stuff. Kasich apparently wants a full-on re-invasion of Iraq. Trump wants to kill terrorist families. Cruz wants to carpet bomb ISIS but has no idea what that actually means. Rubio thinks our Middle Eastern allies will all magically provide lots of ground troops just as soon as 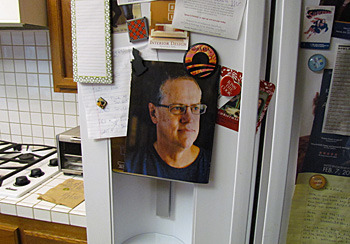 the lily-livered Obama is out of office. Carson is just plain scary in his lack of knowledge of anything. The only thing they all agree on is that America needs a testosterone injection. It’s pretty depressing to watch.

But maybe I can cheer you up. Earlier today I told you that the latest issue of Mother Jones features a scarily-near-life-size picture of me, suitable for putting on your refrigerator if you buy a copy of the magazine. Did you think I was joking? I wasn’t, and I have photographic proof on the right. But I tell you what: If enough of you make a donation to MoJo tonight, I think I can convince them never to do this again. Deal?

Here we are for the….what is this? The fifth Republican debate? They fly by so fast! It seems like just yesterday that Carly Fiorina was a toddler in the undercard debate, but now look at her. Proudly up on the main stage and polling at 2.2 percent.

11:02 – Jeb mentions his “detailed plans” yet again. He probably ought to cool it on that.

10:55 – Commercial break! Then closing statements. While we wait with bated breath, how about making a donation to the hardworking bloggers here at Mother Jones? Just click here.

10:54 – Trump says he won’t run as an independent. At least, it seems like he said it. You never know with Trump.

10:48 – Hugh Hewitt asks Trump what he’d upgrade first: missiles, subs, or bombers. Trump’s stream of consciousness reply is on a whole new level. Hugh asks again. Trump: “I think for me, nuclear, the power, the devastation, is very important to me.” OMG.

10:46 – Christie wants us to dig up Chinese corruption and then tell the Chinese people about it. How? Leaflets?

10:42 – What would Fiorina do about North Korea? Answer: we have to beat up on China. This will convince them to help us get rid of Kim Jong-un. What?

10:38 – Commercial break! And I’m working hard here, folks. How about a donation? Show us that you get it.

10:31 – Carson: We should settle Syrian refugees in…northwest Syria. All we need is a few weapons to defend it. But why do we send Kurdish arms through Baghdad? Does Carson really not know? This is almost painful to watch.

10:26 – FFS, will everyone stop griping about not getting called on?

10:20 – Bush once again needles Trump for getting his information from “the shows.” Sadly, he can’t really pull it off. It does seem to get under Trump’s skin, though.

10:18 – Trump has been mugging for the camera all night. Much like the first debate.

10:09 – The overall impression of this debate is total chaos, despite the fact that everyone on stage except Rand Paul has pretty much the same foreign policy.

10:03 – Carson: Middle East has been in turmoil for thousands of years. We’re not going to fix it. Huh? Does he even listen to his own words?

10:01 – Trump: We’ve spent $4 trillion trying to topple dictators. Now the Middle East is a mess. Not totally clear what he means by this, but he’s certainly opened himself up for attack.

9:56 – Cruz manfully tries to defend teaming up with dictators as long as they’re our dictators. 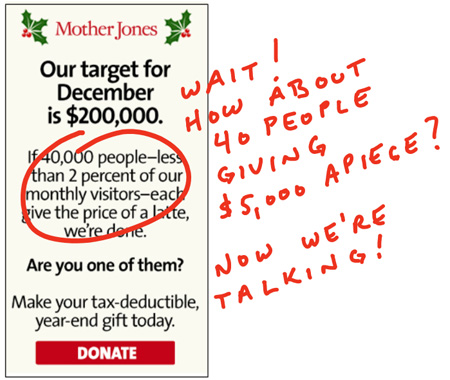 9:52 – Commercial break! Why not take the time to make a donation to Mother Jones? All you have to do is click here. It only takes a few seconds.

9:51 – Carson: we have to destroy the caliphate. We have to “take their energy.” We have to cut off Raqqa. That’s his strategy?

9:48 – Um, no, Carly, Petraeus wasn’t “retired early” because he told Obama something he didn’t want to hear. You remember the real reason, don’t you?

9:47 – Rubio seems to think the only reason that Middle Eastern countries aren’t providing ground troops is because they don’t trust Obama. I hope he doesn’t actually believe that.

9:45 – Kasich appears to be proposing a massive re-invasion of Iraq.

9:44 – Now Trump doesn’t want to close down parts of the internet, he just wants to get a bunch of “smart guys” to infiltrate them. I wonder why no one has thought of that before?

9:37 – Should we kill the families of terrorists? Trump says he would be “very, very firm with families,” whatever that means.

9:33 – Rubio says we need ground troops to defeat ISIS. This isn’t rocket science, but props to Rubio for actually saying it.

9:31 – Wolf asks Cruz again: would he carpet bomb cities? Cruz says he’d carpet bomb the places where ISIS is. This is, of course, in the cities.

9:30 – Cruz yet again seems to think the Kurds will fight outside Kurdistan if we arm them. This is pitiful.

9:25 – Fiorina thinks we missed the San Bernardino shooters because we used the wrong algorithms. Also: we don’t need to force Silicon Valley companies to cooperate with NSA. We just need to ask them. Has she paid attention to anything at all over the past three years?

9:23 – Who’s right about the USA Freedom Act, Rubio or Bush? Carson looks like a deer in headlights and says Wolf should ask them. He doesn’t want to get in the middle of this. WTF? This is the new, well-briefed Carson?

9:20 – Christie just flat-out said that policy is boring. All we need is a guy who’s tough on terrorism. This legislation mumbo jumbo from the junior senators is for wimps.

9:18 – Rubio implies that NSA can’t access phone records with a warrant. But he didn’t quite come right out and say that, which means he can deny it later.

9:16 – This is great. Rubio has just implicitly accused Cruz of blabbing classified information on national TV.

9:15 – Rubio giving another one of his mini canned speeches. Do people really respond well to this?

9:13 – Cruz can’t abide the thought that he voted for a bill that Obama signed.

9:11 – So far, there’s been zero substance in this debate. Obama is horrible, ISIS must be destroyed, I’ll keep you safe, blah blah blah.

9:07 – These folks are still obsessed about whether Obama will say radical Islamic terror. Can someone please ask why they’re so fixated on this? Do they really think that saying this over and over actually makes a difference?

9:03 – Shouldn’t Obama get 30 seconds every time someone mentions him?

9:01 – Cell phones with ISIS flags on them? Have I missed something?

8:49 – Rand Paul going after Trump and Rubio in his opening statement. OK then.

8:39 – Ben Carson has apparently been studying up on foreign policy. I so can’t wait for that. Do you think he’s figured out how to pronounce Hamas yet?

8:30 – Three minutes away from Reince Priebus! Then we get to see whatever ridiculous opening video CNN has concocted for us tonight.

8:22 – So how was the opening act? Did Lindsey Graham declare war on anyone?

8:13 – We have a few minutes while the CNN folks burble away, so why not donate some money to Mother Jones while we wait? I plan to harass you all evening about this, so you might as well do it now. Come on. What do you say?