Does immigration depress wages? One of the seminal studies of this was done by David Card in 1990. He studied the Mariel boatlift of 1980, which swamped Miami with new immigrants, and concluded that there was little effect on wages. A few months ago, George Borjas took a fresh look at the data, and concluded there was an effect, but it was 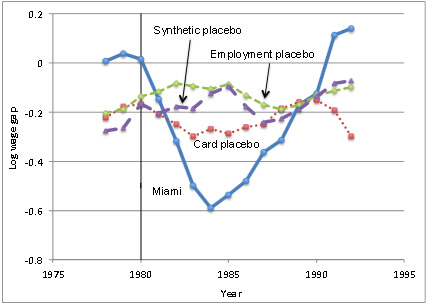 restricted to those without a high school diploma. Among high school dropouts, wages dropped 10-30 percent for about six years.

The key chart is on the right. Click here for more detail, but the nickel version is that the blue line shows the wages of Miami’s dropout population compared to other cities. I wrote about this at the time, and noted an oddity: “Before 1980 and after 1990, the wages of high school dropouts in Miami are above zero, which means dropouts earned more than high school grads. That seems very peculiar, and none of the control cities show the same effect. Does this suggest there’s something wrong with the Miami data?”

Yes it does! A pair of researchers at UC Davis tried to recreate Borjas’s conclusions, but they couldn’t do it. “Significant noise exists in many samples,” they say, “but we never find significant negative effects especially right after the Boatlift, when they should have been the strongest.”

So what’s up? Where did Borjas get his huge effect? Well, it turns out that his Miami data was indeed suspect:

We find that the main reason is the use of a small sub-sample within the group of the high school dropouts, obtained by eliminating from the sample women, non-Cuban Hispanics and selecting a short age range (25-59). All three of these restrictions are problematic and, in particular, the last two as they eliminate groups on which the effect of Mariel should have been particularly strong (Hispanic and young workers). We can replicate Borjas’ results when using this small sub-sample and the smaller March CPS, rather than the larger May-ORG CPS used by all other studies of the Boatlift. The drastic sample restrictions described above leave Borjas with only 17 to 25 observations per year to calculate average wage of high school dropouts in Miami.

So Borjas used a small March census sample, and then left out several groups that should have shown a strong response to the wave of immigration. As a result, his sample size is so small as to be useless. Tweaking his data even slightly removes the wage effect entirely.

Borjas does mention sample-size problems in his paper, but never really addresses it or makes it clear just how tiny his sample is. I’ll be curious to hear Borjas’s reaction to this, but given the questions I already had about his paper, this reappraisal of his data puts it pretty firmly in the category of unlikely to be true. For now, it appears that even a massive influx of new immigrants over a period of just a few weeks has almost no effect on wages at all.

Does this mean that immigration in general also has no effect on wages? Nope. But it certainly suggests that the effect is probably pretty small if it exists at all. In any case, the Borjas paper doesn’t seem to prove anything one way or the other.