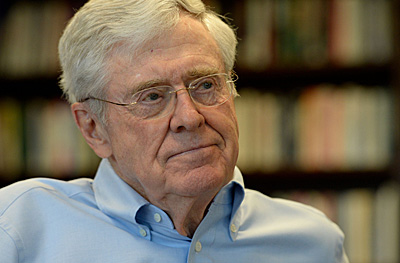 Stephen Foley talks to Charles Koch about the vast amounts of money he has raised to support conservative politicians:

He says he is “disappointed” by the current crop of Republican presidential candidates, and resigned to having to support one with whom he agrees on only some issues. “It is hard for me to get a high level of enthusiasm because the things I’m passionate about and I think this country urgently needs aren’t being addressed.”

The Kochs’ political machine has presented all the candidates with a list of issues it wants on the agenda but, says Koch, “it doesn’t seem to faze them much. You’d think we could have more influence.”

So does the man that the left believes has too much influence in politics believe he in fact has too little? “I’m pleased that I can still speak and I’m pleased that it isn’t worse,” he says. “They haven’t nationalised all the industries like happened in the UK when the Fabians took over.”

I ask him to put his businessman’s hat on and to tell me whether he thinks his political spending is generating a positive return on investment. “I’m not confident,” he says. “I’d say there are some benefits. Ask me in 10 years.”

There are two interesting things going on here. First is Koch’s disappointment that his money doesn’t buy him more influence. It’s easy to laugh at that, but he’s probably right. He’s raised a lot of money. But it’s hard to see that Republican views have changed in his direction much. The entire party denies climate change and wants to lower taxes already, so there was no work to be done there. But a less aggressive foreign policy? An end to corporate welfare? Turning down the volume on social issues? Koch is right: all his money has had no effect on that. It’s only had a significant effect when he’s pushing in the same direction that the GOP wind is already blowing.

Second is Koch’s fascinating observation about the Fabians. The way he mentions them, he sounds as if he’s genuinely surprised that he’s still allowed to say what he pleases. He’s genuinely surprised that Koch Industries hasn’t been nationalized. Here’s a man who has been fighting political battles for decades and is worth something north of $40 billion thanks to the growth of his business. If that doesn’t demonstrate America’s fundamental commitment to both free speech and capitalism, I don’t know what does. And yet, he still seems fearful that Marxism is just around the corner.

It’s weird. What is it that makes a smart guy like him so paranoid?