Ta-Nehisi Coates recently criticized Bernie Sanders for saying he opposed reparations. I responded briefly last week, but Max Sawicky has more to say about this, and a couple of days ago asked if he could say it here. Well, why not? I’m not the best guy in the world to defend a socialist, after all. So here’s Max on reparations and Bernie Sanders.

I read Ta-Nehisi Coates. Sometimes I like what I see, but not so much this past week. I’m here to take exception to his recent columns on Bernie Sanders and reparations.

In the Hillary vs. Bernie civil war, we often attack each other on spurious grounds. You’re just looking for a job. You’re corrupt in ways multifarious. You’re ____splaining. Please. The objective of politics is to encourage people to voluntarily and happily come around to your own view on what is to be done. Browbeating is counterproductive. At the end of this little adventure, we all have to get behind blocking a Republican from the presidency, and the ensuing barbarism. I have nothing bad to say about Ta-Nehisi Coates the person, and you shouldn’t either. Let’s get to the meat and potatoes.

I’ll start with his basic case for reparations. Exhibit A is the big, justly praised essay in The Atlantic. I will stipulate that the fact of a debt of the United States to African-Americans is incontrovertible. Reading the essay made 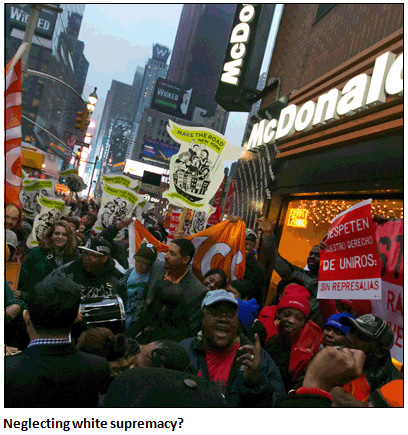 me more convinced of that than before. Whether that justifies trashing Sanders is a different matter.

TNC’s basic argument is that the Sanders campaign purports to be a radical break with the status quo but fails to live up to its name. Even worse, it is of a piece with white supremacy.

The polemic launches with a basic misinterpretation of Sanders’ remark that reparations is “divisive,” driven by Coates’ bitter rejoinder that socialism and single-payer are divisive too. But these are very different kinds of “divisive.” In the case of reparations, don’t kid yourself: it means instant electoral suicide. With single-payer, it means opposition from moneyed interests. Single-payer is popular. Socialism could be too, sooner I would say than reparations, since for Bernie socialism means a welfare state turbocharged by expanding universal, race-blind programs.

What’s more, single-payer advocacy could pay dividends in the form of incremental improvements to Obamacare, such as a public option or a crackdown on prescription drug prices. The same is true of other proposals, such as free college or massive infrastructure investment. That aside, even with zero cooperation from Congress, a president has command of important executive levers. Reparations is more of an all-or-nothing thing.

I’d like to see a scenario in which reparations becomes popular. The appeals are usually moralistic. I am susceptible to such appeals, and probably you are too. Would that MoJo readers ruled the world, but we don’t.

Coates is offended by reparations’ unpopularity, and we should be as well, but it remains a fact. Bernie is running to win, not to mount a symbolic campaign. He could be criticized for inattention to other issues, such as defense spending, reproductive rights, and Israel/Palestine. Coates has no such handicaps. As he says, “Sometimes the moral course lies outside of the politically possible.” Precisely! This is national, presidential politics, not an Atlantic symposium. If you’re searching for the moral course, you are not about winning an election.

In the final paragraph of his first blast, Coates goes over the top:

Evidently Sanders is not merely neglecting racism, he is proposing to maintain it. In his follow-up column, Coates describes Sanders’ lapse as “making peace with white supremacy.”

Besides the slurs are the politics:

Sanders’s basic approach is to ameliorate the effects of racism through broad, mostly class-based policies—doubling the minimum wage, offering single-payer health-care, delivering free higher education. This is the same “A rising tide lifts all boats” thinking that has dominated Democratic anti-racist policy for a generation.

I don’t think I need to explain that John F. Kennedy’s original “rising tide,” beloved by subsequent centrist Democrats, referred to economic growth providing universal benefit. It clearly does no longer. (I would say it never did.) That’s Bernie’s point. Nor should I need to explain that because minorities are concentrated in low-wage jobs, an increase in the minimum wage or a reduction in the unemployment rate disproportionately benefits them. I assume TNC is aware of it. He’s not dumb, so failure to acknowledge it is questionable politics.

Sanders proposes to intensify this approach. But Sanders’s actual approach is really no different than President Obama’s.

Really? There is no difference between Sanders and Obama? Or Clinton? If an expansion of universal programs ameliorates (but doesn’t end) racism, a bigger expansion does so to a greater extent. Size matters. There’s a huge difference between Obamacare and Medicare-for-all, and opponents of these programs know it. In fact, much of the opposition to Sanders’ sort of proposals—not to mention Obamacare itself—is founded, ironically, precisely on the accurate impression of a disparate racial impact.

I began declaring my support for the concept of reparations. Since we’re talking politics and policy, the question looms of what to propose. Coates repeatedly insists that universal social-democratic programs are all well and good, but they are woefully inadequate responses to racism. They are mere “bandages” on the wound. This is a gross exaggeration, see the above example of the minimum wage, but strictly speaking it is true. So the knock on Sanders rests on what he refuses to support. What is the Coates alternative?

As Kevin pointed out, TNC claims a solution may be found in a bill (H.R. 40) from Rep. John Conyers that he has introduced every year, since at least 2001. It would form a commission to study reparations and devise programs. This is pretty weak stuff. I’ve worked in Washington D.C. since 1984. Politicians propose commissions and studies when they can’t do anything, when they don’t want to do anything, or when they don’t know what else to do. I would credit Conyers with a gambit to start an official conversation. I’m for it, but it isn’t much. It would actually be easy for Bernie to endorse. But it’s still a pretty insubstantial thing, in and of itself.

You can check the legislative history. In years past H.R. 40 garnered as many as 35 or 40 co-sponsors, mostly members of the Black Caucus and a few avant-garde types like Dennis Kucinich and Jerry Nadler. In more recent years, there have been hardly any (two at most) co-sponsors of the bill, white or black. It makes no sense to excoriate Bernie Sanders for inadequate attention to racism in a national presidential campaign, for failure to support a proposal that most members of the Congressional Black Caucus, not to mention Barack Obama, have not bothered to endorse for years, or ever.

On the other hand, Coates has kind words for “a program of job training and public works that takes racial justice as its mission but includes the poor of all races.” Of course, this kind of race-blind, racially progressive program is Bernie’s bread and butter. In a subsequent post, Coates cites the work of William Darity, a distinguished economist, as a source for specific proposals. I would like people to be more familiar with this work, but at present I’m afraid that promotion of race-targeted payments is not a political exercise.

Coates wants to see a national moral reckoning with the debt created by centuries of white supremacy. Moral reckonings are the stuff of conferences, anthologies, sermons, and long-form magazine articles. Politics is a different business. When it comes to politics, Coates is shooting blanks.

Except for this: you might think Coates is an equal-opportunity critic of Clinton and Sanders. He recently dinged Hillary for her shaky understanding of Reconstruction. But what he’s really implying is that there’s nothing special about the Sanders campaign, so you lose nothing by voting for the more electable Clinton.

White supremacy happened before capitalism, but along with other fans of the great bearded one, I would assert that the two came to be deeply interconnected. Capitalism creates legions of victims whose descendants are owed more than all the money in the world. It also creates a potential army of comrades. The Sanders campaign is the first opening towards such a movement in a long time.

For a more critical view of reparations from the left, see Doug Henwood’s interview with Professor Adolph Reed. For more on why social-democratic programs are not race-neutral in impact, see Matt Bruenig.