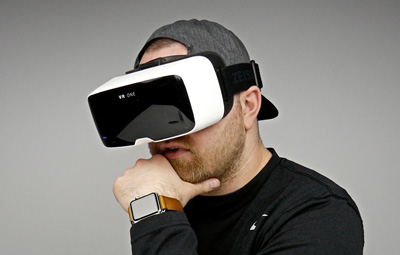 Farhad Manjoo is trying hard to dredge some kind of story out of this year’s Consumer Electronics Show:

If news from CES feels especially desultory this year, it might not be the show that’s at fault. Instead, blame the tech cycle. We’re at a weird moment in the industry: The best new stuff is not all that cool, and the coolest stuff isn’t quite ready….Welcome to Prototype World, a brief intermission in your regularly scheduled program of disruption, during which everything new will more or less stink.

“It’s like the junior high years in technology,” said Ben Bajarin, an analyst at Creative Strategies. “We’re in those awkward teenage years where everything looks and feels funky.”

Over the next couple of CESes, there’s a good chance we will see a lot of devices that will feel not quite ready. Virtual reality will underwhelm, artificial intelligence will feel annoyingly unintelligent, and cars and drones that navigate themselves will seem safer when parked. There will be wearables you won’t want to wear and home devices that will make you want to buy a new place.

Hmmm. Am I just getting old and crotchety?1 Because I’d swear that tech has felt this way pretty much every year since at least the Reagan administration. How many years did GUI interfaces seem “almost” there before they finally got genuinely useful? Ditto for portable PCs. Ditto for PDAs. Ditto for online shopping. Ditto for Unix. Ditto for open source. Ditto for social media. Ditto for a hundred other things that I’ve forgotten about.

This is just the nature of modern tech: The really cool stuff is always a “few years” away. And when it finally comes, we’ve been talking about it so long that it seems ho-hum. Yeah, Amazon is great, isn’t it? So what’s next?

It may be the case that there are no breakout stars at CES this year, but more generally, I think Manjoo is suffering from a problem that’s more about us than about tech. Back in the 80s and 90s, I can remember being thrilled with stuff that just seems crazy today. A 9-pin dot matrix printer? Holy cow! It’s practically print quality. (It wasn’t.) A clamshell PC that only weighs 8 pounds? Crazy! We’ll all be carrying computers everywhere we go by next year. (Actually, it took about 20 years.) PalmPilots? Who even needs paper anymore? (Still waiting on that one.)

Back then, everything was new and exciting. Today our standards are a lot higher. We just don’t get excited so easily. Tech has been so integrated into our lives that it’s just another category of consumer appliance. We still love it, the same way that car geeks love it when new model cars are introduced, but most of us are no longer easily impressed. And when something cool does finally come along, we sort of shrug. We expect it nowadays.

So prepared to be bored year after year at CES. Our memories may fool us, but tech has always taken a while to go from “hmmm….” to widely useful. We’re just less patient these days. In the meantime, though, can’t someone finally invent a better battery? We really have been waiting too long for that.

1This is a rhetorical question, people. Actual answers are distinctly unhelpful.