Annie Lowrey and Abraham Riesman have decided to quit Twitter. Why? Mostly because it’s a soul-draining hive of scum and villainy:

Lowrey: Over the years, as an official woman-on-the-internet, I’ve encountered some truly insane garbage on Twitter. You write a story about Social Security reform, and then someone tells you to swim out into the ocean until you’re too tired to swim anymore and you drown. There’s also the persistent nagging by the godforsaken lunatic assholes, like the Obamabots, for instance. But that’s not really the stuff that bothers me. It’s the little stuff. The mansplaining from well-intentioned friends. The forest-for-the-trees criticism of my grammar. The sincere complaints about my vocal fry every time I go on a radio program, podcast, or television. (Read this in a suuuuupper-scratchy voice? Go fuck yourselves.) The constant, degrading references to me as my husband’s wife.

Finally, I decided to wash my hands of the whole thing when I wrote something about poverty and proceeded to get a flood of nasty, sexist tweets and emails — just days and days of it. It was impossible to defend myself, and impossible to work, and impossible to focus, and I just wanted to leave the internet forever. It really messed me up for a few days: Why put things out there if you’re not going to be able to have even a 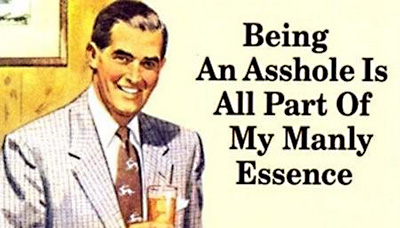 semblance of a good conversation about them? Why put things out there if people are going to attack you rather than the work?

Riesman: My “epiphany” came in two parts, both of them pretty bland. I’d tweeted something about Star Wars, and someone I don’t know somehow saw it and tweeted a link to it with a snarky comment attached. At that point, a notorious asshole whose name I won’t mention saw that person’s tweet and retweeted it. All of a sudden, dozens and dozens of the asshole’s followers decided to hurl insults at me and do weird stuff like [blah blah blah].

….But the final straw didn’t come until my aggravation was compounded the next day. In the mid-afternoon, I got into a fight on Twitter with a reviewer from a low-end culture site who had some idiotic opinions about a cartoonist I enjoy. The reviewer is a person of no major consequence in the critical world, and the site is widely derided, but I still felt compelled to get into an argument with her. I wasted nearly an hour doing so and found myself exhausted afterward.

This is the basic problem with Twitter: It’s too damn big and too damn easy to use. Back when dinosaurs roamed the earth, people had to do some work if they wanted to casually trash you. Maybe write a letter to the editor. Or dig up your home address and write a letter to you. On rare occasions, they might even call you on the phone.

Then email came along and made the ALL CAPS insult genre a lot easier: just click a link, pound out a few sentences, and hit Send. Easy peasy. Still, no one saw your brilliance except the target, and you rarely got a response. It was progress, but still not very satisfying.

Then came Twitter. It was even easier than email. Just hit Reply or RT and do your thing. You’re limited to 140 characters, so it’s not very much work. Everyone who follows you gets to see it, and your target knows it—so they sort of feel obligated to defend themselves. And to make things even better, while the 140-character limit is great for random vituperation, it’s a tough limit for reasoned response. And to make things even more better, getting a mob of fellow outrage junkies to follow your lead isn’t just easy, it’s almost inevitable. It practically happens on its own.

Doesn’t that sound great? It sure does!

But on the receiving end? Not so much. You can repeat zen koans to yourself all you want—ignoring an asshole is the first step toward enlightenment—but it’s tough. There’s just so many of them. Sure, a hundred assholes is only 0.001 percent of the nation’s assholes, but mental statistics just aren’t enough to overcome the emotional tsunami of raw assholery aimed at you you you.

Basically, Twitter is the perfect platform for two things: snark and assholery. And it’s not always easy to tell them apart. I have a pretty firm rule about never replying to assholes, but sometimes I make mistakes. I ignore someone who’s asking a good faith question because my asshole detector goes off thanks to the tone of the tweet (most often because it’s easy to strike the wrong tone in 140 characters). Likewise, sometimes I engage people who I mistakenly assume have a good faith criticism, only to quickly discover they’re just looking for a fight. Life is tough on the internets!

Anyway, in the end this is a lesson about economics. What happens when you vastly reduce the cost of being an asshole? Answer: the supply of assholes goes up. That’s what Twitter has done for us. It’s also provided a decent platform for entertaining snark; breaking news; and pleasant chatting that’s open to anyone who wants to participate. Is the tradeoff worth it? It all depends on how good you are at ignoring assholes and not getting addicted to internet fights. So how good are you? If you’ll just wait a moment, I’m sure BuzzFeed will post a quick test to tell you.