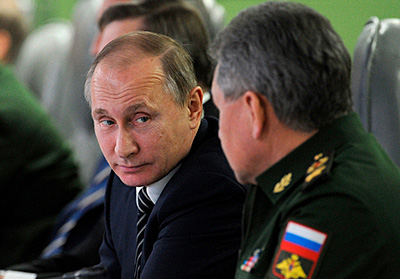 In his latest interview in the Atlantic with Jeffrey Goldberg, Obama tries to wave away what Putin has done in Syria and Ukraine: “The fact that he invades Crimea or is trying to prop up Assad doesn’t suddenly make him a player. You don’t see him in any of these meetings out here helping to shape the agenda. For that matter, there’s not a G20 meeting where the Russians set the agenda around any of the issues that are important.”

It’s telling that Obama thinks that the only thing that matters is the agenda at international gab-fests. That’s because the president, like most European heads of state, lives in a 21st century, post-power world where international law is more meaningful than brute force. Putin, by contrast, inhabits a 19th century, Realpolitik world where strongmen act to advance their own interests with scant regard for the feelings of other states, much less of multilateral institutions such as the G20 or the United Nations. In the clash between these two incompatible visions of the world, there is no doubt which one is winning: From Crimea to Syria, Putin is rewriting the rules of the international game in his favor.

This is such a tired cliche: Putin the 19th-century strongman, a modern-day Clausewitz who upends the world by simply taking charge and doing whatever he wants. Meanwhile, Obama mewls helplessly on the sidelines, issuing empty condemnations from the State Department but unable to stop the he-man who’s bullying him.

Sigh. Can you imagine the conservative reaction if Obama announced a bombing campaign with limited objectives, and then withdrew after six months? It would be merciless. He’s abandoning our ally! He was never serious in the first place! Our enemies are laughing at us! We need to crush our enemies, not annoy them with pinpricks!

But when Putin does this, he’s the reincarnation of a new world order, not a guy with a smallish military and a grand total of one (1) military base outside his own territory. Putin, like Donald Trump, is a helluva marketing genius, but that’s largely thanks to all the American conservatives who are in such thrall to him. To read Boot, you’d think Putin’s six-month air campaign around Aleppo was the most dazzling show of military brilliance since the landing at Inchon.

Let it go, guys. Syria is a quagmire that no outside power can win. Obama knows this and has mostly stayed out. Putin knows this too, and exerted the minimal possible force to prevent the fall of his occasional ally Assad—and then got out as fast as he could. Frankly, they both show greater common sense than most American conservatives.