I’ve long believed that the attack on Libya was something of a watershed for President Obama. Before that, he may have been more skeptical of using American military power than most people, but he was still basically on board the consensus train. After that, he finally felt in his gut what he had long believed in his mind: American intervention, especially in the Middle East, just doesn’t work very well.

But I might have the wrong war. In a fascinating cover story for the Atlantic, Jeffrey Goldberg suggests that the real turning point was Syria’s chemical weapons. Obama had famously drawn a “red line” on Syria in 2012: if the regime used chemical weapons, it could expect a ruthless American response. But a year later, 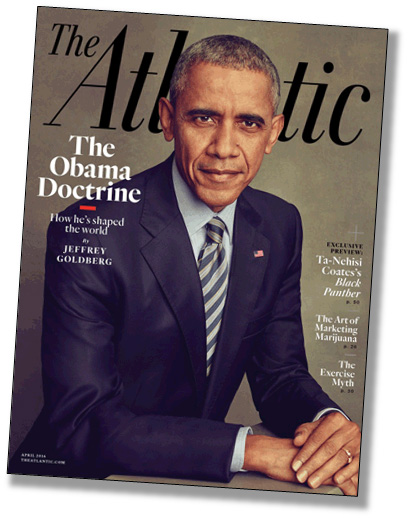 when Bashar al-Assad’s army went ahead and used them anyway, Obama got cold feet.

The fascinating part is this: if there’s a single foreign policy decision that’s earned him the most abuse, this is the one. But it turns out that Obama himself thinks it’s one of his finest moments:

Given Obama’s reticence about intervention, the bright-red line he drew for Assad in the summer of 2012 was striking….It appeared as though Obama had drawn the conclusion that damage to American credibility in one region of the world would bleed into others, and that U.S. deterrent credibility was indeed at stake in Syria.

….Obama had already ordered the Pentagon to develop target lists. Five Arleigh Burke–class destroyers were in the Mediterranean, ready to fire cruise missiles at regime targets….But the president had grown queasy….The American people seemed unenthusiastic about a Syria intervention; so too did one of the few foreign leaders Obama respects, Angela Merkel, the German chancellor. She told him that her country would not participate in a Syria campaign. And in a stunning development, on Thursday, August 29, the British Parliament denied David Cameron its blessing for an attack. John Kerry later told me that when he heard that, “internally, I went, Oops.”

….Late on Friday afternoon, Obama determined that he was simply not prepared to authorize a strike….He was tired of watching Washington unthinkingly drift toward war in Muslim countries….The next few days were chaotic. The president asked Congress to authorize the use of force—the irrepressible Kerry served as chief lobbyist—and it quickly became apparent in the White House that Congress had little interest in a strike.

….“I’m very proud of this moment,” he told me. “The overwhelming weight of conventional wisdom and the machinery of our national-security apparatus had gone fairly far. The perception was that my credibility was at stake, that America’s credibility was at stake. And so for me to press the pause button at that moment, I knew, would cost me politically. And the fact that I was able to pull back from the immediate pressures and think through in my own mind what was in America’s interest, not only with respect to Syria but also with respect to our democracy, was as tough a decision as I’ve made—and I believe ultimately it was the right decision to make.”

This was the moment the president believes he finally broke with what he calls, derisively, the “Washington playbook.”

No wonder I like this guy so much. I’m going to miss him no matter who wins the election in November.

Goldberg’s entire piece is long, but well worth a read—and I might have more to say about it later. But I found the Syria episode especially interesting. A couple of years ago I wrote that maintaining “credibility” was “perhaps the cause of more dumb wars than anything else in history,” and that fighting back against this notion was a “rare sign of wisdom in a president.” Basically, Obama made a mistake in setting out the red line in the first place, and eventually figured out that it was unwise to let our foreign policy be dictated by a brief, intemperate remark. That’s especially true when all the loudest hawks in Congress turn out to be a bunch of gutless armchair generals when you ask them to put their hawkishness to a roll-call vote.

In any case: good for Obama. He’s correct that this decision cost him politically. He’s also correct that it was the right decision to make. Frankly, the mere fact that it pissed off so many of our Middle East allies—who plainly care about little except having America fight their tribal battles for them—is enough to convince me. American intervention in the Middle East has generally been pretty disastrous, and it’s long past time for everyone to figure that out. That very definitely includes all the folks who are actually in the Middle East.