For years, liberals have been arguing that the Republican Party is built on appeals to racist sentiment. It’s gotten subtler over time, but it’s still there. Sometimes it’s overt, other times it merely takes the form of tolerating racial animus in others. Sometimes it comes wrapped in a policy package, other times it’s wrapped in dog whistles. Either way, it’s all part of the GOP’s electoral strategy. They know their base well.

Republicans, needless to say, don’t take kindly to this. It’s all phony and cynical, a way for liberals to take principled differences and turn them into racial appeals of their own. Sure, there may be racists who vote for Republicans, but there are 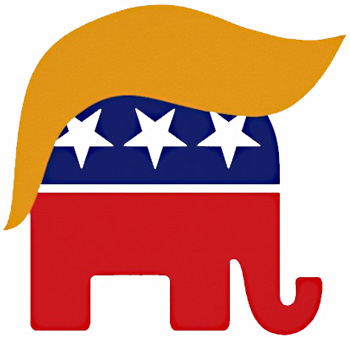 plenty who vote for Democrats too. It’s liberals who are addicted to playing the race card.

But now we’re living through the era of Donald Trump. He started his campaign on a racial note, suggesting that Mexicans who immigrated to the US illegally were largely murderers and rapists. He’s proposed a ban on Muslims visiting the United States. He has made China, Japan, and Mexico his scapegoats for lost American jobs. He was one of the original birthers, and to this day refuses to renounce it. This weekend, on national TV, he declined to condemn the Ku Klux Klan or disavow the support of white supremacists. All of this has had the effect of making him relentlessly more popular with the Republican base. Over at the Wall Street Journal, Bret Stephens is appalled:

It would be terrible to think that the left was right about the right all these years. Nativist bigotries must not be allowed to become the animating spirit of the Republican Party. If Donald Trump becomes the candidate, he will not win the presidency, but he will help vindicate the left’s ugly indictment. It will be left to decent conservatives to pick up the pieces—and what’s left of the party.

A few days ago, I asked liberals to oppose Trump. It was a straight-up moral pitch. Sure, Marco Rubio or Ted Cruz would be harder to beat than Trump, but a better chance of winning the presidency wasn’t worth the cost of boosting the fortunes of a racist thug like Trump. At a level deep in our souls, a Trump campaign—to say nothing of a possible Trump victory—is bad for liberalism and bad for the country. We should do the right thing by fighting Trump at every turn and taking our chances in November.

But when it comes to doing the right thing, it’s conservatives who truly have the tough choice this year. Trump looks likely to win the Republican nomination, and that means the right thing for them to do is to literally hand the presidency to Hillary Clinton. Can you imagine how hard that’s going to be? Hillary Clinton! And we’re asking them to vote for her. Or, at the very least, to campaign against Trump and cast a protest vote. Either way, they’re giving up their chance to kill Obamacare, to nominate a Supreme Court judge, to restore religious liberty as they see it, and to repeal all those executive orders they hate.

Will they do it? I don’t know, but it’s no joke to say that I feel their pain. All the cynicism and schadenfreude in the world can’t mask how hard this is going to be. Conservatives are about to be tested as few political movements ever are.