I’m a pretty committed environmentalist, but it’s still hard not to feel a bit of schadenfreude over the problems that California’s premier environmental law has had on the construction of bike lanes:

The California Environmental Quality Act, known as CEQA, has stymied bike lanes up and down the state for more than a decade….“The environmental law is hugely frustrating,” said Dave Campbell, advocacy director for Bike East Bay, which has pushed for the Fulton Street 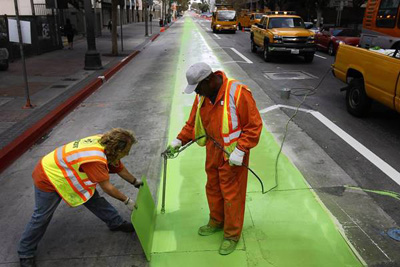 bike lane. “It’s a law that allows you to say no. It’s not a law that lets you say yes.”

….The issue has festered for a long time. A decade ago, a lawsuit against San Francisco’s citywide bike plan stalled the city’s plans to add more than 30 miles of bike lanes for several years….Even without the threat of litigation, the environmental law can stop bike lanes in their tracks. When city of Oakland officials wanted to narrow a wide road near a major transit station and add two bike lanes, they realized it would be difficult to comply with the environmental law’s rules and didn’t proceed, said Jason Patton, Oakland’s bike program manager. About a decade later, the road remains a six-lane highway.

“CEQA is an incredible burden to doing work in urban areas,” Patton said. “And I say that as a committed environmentalist.”

The environmental law requires proponents of new projects — including bike lanes — to measure the effect the project would have on car congestion. When a traffic lane is taken out in favor of a bike lane, more congestion could result along that road. That result can put proposed bike lanes in peril. And traffic studies to show whether installing a bike lane would lead to greater congestion can cost hundreds of thousands of dollars. Oftentimes, cities won’t bother with the effort.

Needless to say, this is the same complaint that developers have long had with CEQA: It allows NIMBYs to hold up construction of new projects endlessly with faux environmental objections. Go ahead and just try to build a dense development in LA. Plenty of folks would love to do it. But you’d better be prepared for years or more of grinding lawsuits from every nearby resident who doesn’t want more traffic.

I’m no expert on CEQA, so I won’t try to offer any detailed criticism here. Generally speaking, though, I’d like to see the law reformed so that genuine environmental concerns get the hearings they deserve, but no more. There needs to be some kind of stopping point or reasonableness test in there. A $100,000 bike lane shouldn’t require $200,000 in environmental impact reports and another $200,000 defending lawsuits from bike lane haters. Likewise, a proposed apartment building should be required to acknowledge genuine environmental impacts—on traffic, on sewage, on air quality—but there needs to be a limit to how detailed this needs to be. Bike lanes are great, but so are apartment buildings.