A couple of weeks ago we bought a Neato robotic vacuum. It wouldn’t operate for more than five minutes at a time, so I called tech support. They were very nice, and said I had to “calibrate the battery.” Huh. I did that, and it got better, but then it wouldn’t return to its base. Calibrate it again, they said. So I did, and it started returning home. But then it started running into a wall and getting stuck. I don’t know why. It was just a bare wall. But the robot apparently wanted to climb up to the ceiling or something, and you know how robots are once they get an idea in their heads. Then it went under a chair and refused to come out.

So I returned the Neato and went to Fry’s, where I bought a Roomba. Much better! It worked the first time with no problems—except for one thing: it would only clean one room. Apparently some bright spark in the Roomba marketing department asked engineering to 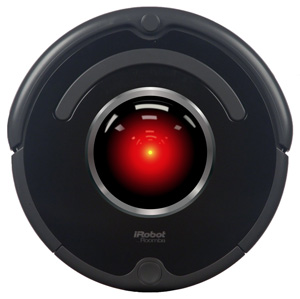 write a bit of additional firmware that would cripple the device so they could call it a new model and sell it at a new price point. But this makes it fairly useless, since the whole point of a device like this is to schedule it and forget it.

But I tried it anyway. Oddly, it worked OK upstairs, where there are many hallways and rooms. Downstairs, though, it would only clean the living room. I moved it to the kitchen, but no dice: it made a beeline for the living room and cleaned it again. So I tried one more time. Success! It started cleaning the kitchen. But then it developed a grudge against our dishwasher. I wish I had video of this, but basically it went nuts. It banged into it, circled around angrily, got up on its hind wheels (seriously) and banged away some more. It was pissed. I watched it do this for more than five minutes before I shut it off. I was afraid it would eventually wreck the dishwasher. It’s going back to Fry’s tomorrow.

For some time Atrios has been saying that driverless cars are a fantasy. I think he’s crazy. But I have to score this round in his favor. Robotic vacuums travel at about 1 mph; they don’t have to avoid other robotic vacuums; nothing in their path moves; and all they have to do is crudely recognize obstacles and map a way around them. And yet, after ten years of development, they still can’t do it reliably. Maybe driverless cars really are a fantasy.

But I have good tech news too. Many years ago I got tired of the lousy keyboards that come with modern computers, and bought an old IBM mechanical keyboard. It was nice, but it was so loud I stopped using it. The noise was so overpowering that it almost made conversation impossible.

Last week I decided to try again. You may not be aware of this, but thanks to gamers there’s been a renaissance in high-quality mechanical keyboards. The one I bought was insanely expensive (about $150), but also had some other features I wanted, and it’s killer. 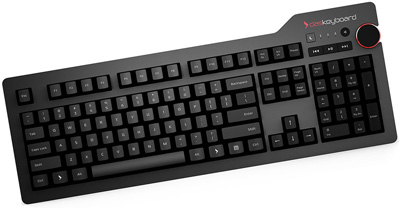 For the cognoscenti among you, it uses Cherry MX brown switches, and I love it. It has a great feel, but the sound is muffled just enough that it won’t wake the neighbors.

It even advanced the cause of journalism. Once I tried it out, I was so eager to type something substantial that I finally got back to a story I’m writing for the next issue of the magazine. It’s all finished now, and you’re probably going to hate it. Everyone’s going to hate it. But at least it was created using a really nice keyboard.