The Department of Health and Human Services has issued a report on 2016 premium increases under Obamacare. This is useful information if you want to answer the following question:

How much do actual Obamacare users have to pay for coverage?

Of course, if this is the question you’re interested in then you have to take into account all the data. You can’t cherry pick just one or two providers; you can’t focus on just the states with the highest increases; you can’t ignore the fact that lots of people shop around for the best price each year; and you can’t pretend the federal subsidies don’t exist. You have to take a look at the nationwide average of what users actually paid. When you do, it turns out that premiums increased about 4 percent this year in the federal marketplace.

But that’s not the only question you might want to ask. There’s also this one:

How has Obamacare affected the cost of health coverage more generally? 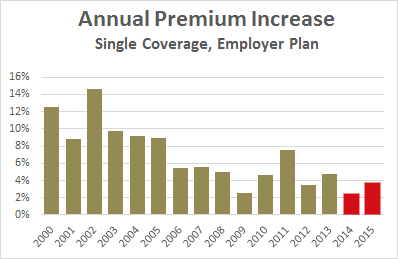 can you compare Obamacare premiums to premiums for employer health care. The coverage is completely different. It’s apples to oranges.

But there are other things you can look at. For example, you can look at the cost of employer coverage over the past decade or so. If Obamacare has devastated the insurance market or jacked up the cost of health care, it will show up here. And this is a nice, clean series for the entire period that provides an apples-to-apples comparison. You can see it on the right.

Long story short, nothing much has happened. The annual increase in premiums declined to about 5 percent in the mid-aughts, and since Obamacare passed it’s been about 3 percent. Nothing to see here.

Now, we only have two years of data since Obamacare passed, so this is still pretty tentative. And you might also be interested in how coverage has changed and what kind of out-of-pocket costs workers are bearing these days. Those are all worthwhile things to look at depending on what questions you’re asking.

But if you want to know about the cost of health care coverage, the answer is pretty simple. Since Obamacare has gone into effect, its users have seen modest premium increases. This year it’s around 4 percent in the federal marketplace. And employer premiums have stayed steady too. Over the past couple of years, they’ve increased about 3 percent annually.

Maybe this will change as time goes by. But for now, Obamacare doesn’t look like it’s done any damage at all to the price of health insurance. In fact, it might have helped. That’s what you see if you take a fair look at all the data.