Every once in a while I get suckered into reading a Wall Street Journal op-ed. I’m not sure why. They’re all the same, after all. Today the clickbait (or is it hatebait?) 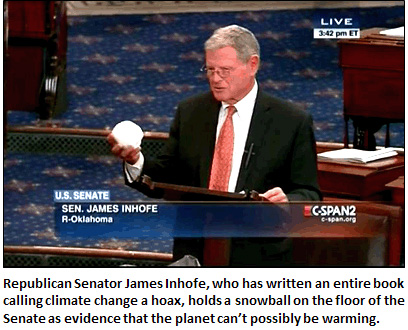 was “History of a Climate Con” from Holman Jenkins:

A little history is in order to appreciate the cynical nadir of climate politics in the U.S. You wouldn’t know it from media coverage, but the closest the U.S. Congress came to passing a serious (if still ineffectual) cap-and-trade program was during the George W. Bush administration in early 2007. Then, within days of Barack Obama’s election in 2008, Al Gore announced a revelation: the “climate crisis” no longer required such unpleasant, de facto energy taxes. The problem could be solved with painless handouts to green entrepreneurs.

Hooray! Everybody loves a handout. The activist duo Michael Shellenberger and Ted Nordhaus noted that the shift in Mr. Gore’s thinking was “highly significant.” “He knows that cap-and-trade, and most any new regulation, would raise energy prices—a political nonstarter during a recession.”

A proposed oil tax swiftly disappeared from the Obama transition website. With control of all three branches of government in hand, the imminent climate threat to humanity suddenly appeared not so urgent after all—passing a “signature” health-care law did. Democrats, it turned out, were in favor of climate root canal only when Republicans were in charge.

George Bush! Who knew he was such a climate change advocate?

He wasn’t, of course. The 2007 bill was introduced by Joe Lieberman and opposed by George Bush. It eventually failed to overcome a Republican filibuster and went down 48-36. There were a grand total of 7 Republicans who voted to proceed and 4 Democrats against. In other words, it failed because nearly the entire Republican Party opposed it and a handful of Democrats joined them.

Fast forward to 2010. A cap-and-trade bill supported by President Obama passes the House with strong Democratic support and nearly unanimous Republican opposition. This is the most serious cap-and-trade effort of the past decade. But in the Senate, after considerable debate, Harry Reid eventually pulls the plug because he can’t find 60 votes to overcome a Republican filibuster. As in 2007, a cap-and-trade bill fails because nearly the entire Republican Party opposes it and a handful of Democrats join them. Neither the urgency of climate change nor Democratic control of the Senate had anything to do with it.

Nor did Al Gore change his mind on anything after the 2008 election. In the context of a massive recession and the promise of a stimulus bill from the Obama administration, it’s true that he favored spending lots of money on incentives to fund clean energy initiatives. Why wouldn’t he? However, in the same breath he maintained that “the United States should lead the way by putting a price on carbon here at home, and by leading the world’s efforts to replace the Kyoto treaty next year in Copenhagen with a more effective treaty.”

I continually wonder why Wall Street Journal readers enjoy paying good money to get lied to so routinely. There’s almost literally nothing true about that passage above. And yet, apparently this is what the Journal’s audience craves. Why?