Over at the Economic Policy Institute, I’m in hot water over my question about the unemployment rate for young high school grads:

For the record, I meant for my snark to be aimed not at EPI, but at the Times. Their reporter should have done at least a cursory check of standard BLS data to see if it backed up her story, but she didn’t. That said, let’s take a closer look at the EPI data.

I can’t quite recreate their methodology, but that doesn’t matter. As usual, I’m only asking, “Compared to what?” In this case the question is, “How does unemployment among young high school grads compare to the normal rate before the recession?” Here’s the EPI chart: 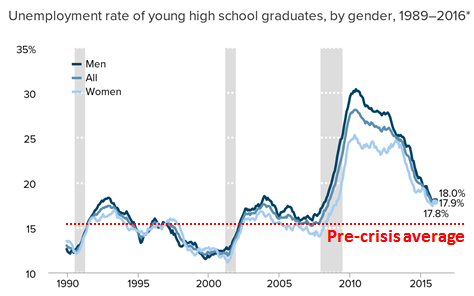 I’m just eyeballing this, but it looks like the pre-crisis average was a little over 15 percent. Today it’s 18 percent. In other words, about one-fifth higher than normal. That’s roughly the same as 6 percent compared to 5 percent.

So if the headline unemployment rate were at 6 percent, would you call that “grim”? I wouldn’t. I’d say there’s certainly room for improvement, but it’s not too bad. Ditto for young high school grads. There’s clearly room for further improvement, but the current numbers don’t suggest an ongoing crisis. Things are very much getting back to normal.

I realize that my hobbyhorse about the economy might be getting annoying. And I sympathize with everyone on the left who wants to make sure we don’t declare victory and give up on further economic gains, especially for the working and middle classes. At the same time, we should also respect what the numbers are telling us. And by all the usual conventional measures, the economy is in pretty good shape. For now, at least, the recession really is largely over.

POSTSCRIPT: Just to make sure I’m as clear as possible, I’ll repeat what I said a couple of days ago: what the numbers tell us is that the current state of the economy as conventionally measured is pretty good compared to normal. This has nothing to do with larger, structural critiques of the economy. If you think that tax rates are too high or wages are too stagnant or income inequality is out of control, those are entirely different issues. These kinds of critiques have very little to do with how well or badly the economy is performing at the moment.