Ever since the Benghazi attacks four years ago,1 conservatives have been hawking the “stand down” theory. Basically, they’re convinced that troops could have gotten to Benghazi in time to help, but someone—Hillary Clinton? President Obama? Ben Rhodes?—overrode the military and told them not to deploy. This has been debunked several dozen times, and never made sense in the first place, but it’s still a big part of the whole conspiracy theory.

A couple of days ago, the ranking Democrat on the Benghazi committee sent a letter to chairman Trey Gowdy claiming that the GOP’s own counsel, Dana Chipman, had admitted during interviews 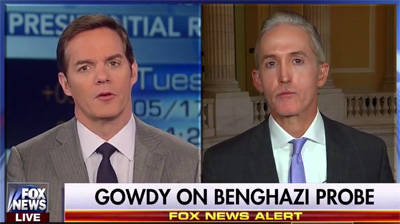 that nothing more could have been done to help. Is that true? Gowdy says no:

When you see the full transcript—and you will—then you will see what Dana was talking about was a very small point: the posture of the troops, the order that was given by [Leon] Panetta and the president, how that order was received, all of that is what we want to ask people about. Whether or not they could have gotten there in time, I don’t think there’s any issue with respect to that. They couldn’t. The next question is, why could you not, why were you not positioned to do it?

Fascinating! Apparently there was never any “stand down” conspiracy theory in the first place. I guess Democrats just made up the whole thing. The only thing Gowdy is really concerned about is why all the troops around the Mediterranean were positioned so far from Benghazi—though that might seem like a fairly easy question to answer: just ask the Pentagon. Once you boil it down, their answer is basically that our military posture in the Med wasn’t based in any way on protecting the city of Benghazi, so there was no special reason they should have been close by.

Anyway, I’m sure Gowdy and his troops will get around to asking all these questions eventually. They just need more time. In the meantime, it’s good to know that nobody is accusing the White House2 of deliberately preventing the military from saving American lives. That would just be crazy, wouldn’t it?

1Seriously. It’s been three years and eight months. Hard to believe, isn’t it?

2Or, presumably, Hillary Clinton. The theory was always even crazier applied to her, since she never had the authority to order troops around anyway.