The State Department’s inspector general has finally issued his report on email preservation and retention practices within the department, and he’s not impressed:

OIG identified multiple email and other electronic records management issues during the course of this evaluation….Insufficient Oversight of the Recordkeeping Process….Print and File Requirements Not Enforced….Limited Ability To Retrieve Email Records….No Inventory of Archived Electronic Files….Unavailable or Inaccessible Electronic Files….Failure To 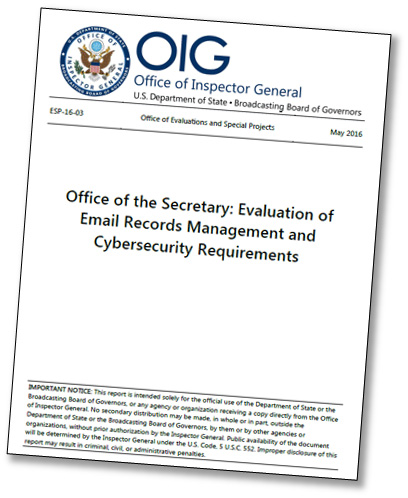 OIG discovered anecdotal examples suggesting that Department staff have used personal email accounts to conduct official business….OIG identified more than 90 Department employees who periodically used personal email accounts to conduct official business.…OIG also reviewed an S/ES-IRM report prepared in 2010 showing that more than 9,200 emails were sent within one week from S/ES servers to 16 web-based email domains, including gmail.com, hotmail.com, and att.net….A former Director of Policy Planning wrote: “State’s technology is so antiquated that NO ONE uses a State-issued laptop and even high officials routinely end up using their home email accounts to be able to get their work done quickly and effectively.”

Yikes! But no one cares about this. We care about Hillary Clinton. Are you ready? Here’s the IG’s blistering report:

Sending emails from a personal account to other employees at their Department accounts is not an appropriate method of preserving any such emails that would constitute a Federal record. Therefore, Secretary Clinton should have preserved any Federal records she created and received on her personal account by printing and filing those records with the related files in the Office of the Secretary. At a minimum, Secretary Clinton should have surrendered all emails dealing with Department business before leaving government service and, because she did not do so, she did not comply with the Department’s policies that were implemented in accordance with the Federal Records Act.

….With regard to Secretary Clinton’s immediate staff…OIG learned of extensive use of personal email accounts by four immediate staff members (none of whom responded to the questionnaire). During the summer of 2015, their representatives produced Federal records in response to a request from the Department, portions of which included material sent and received via their personal email accounts. The material consists of nearly 72,000 pages in hard copy and more than 7.5 gigabytes of electronic data.

….During Secretary Clinton’s tenure, the FAM also instructed employees that they were expected to use approved, secure methods to transmit SBU [Sensitive But Unclassified] information and that, if they needed to transmit SBU information outside the Department’s OpenNet network on a regular basis to non-Departmental addresses, they should request a solution from IRM. However, OIG found no evidence that Secretary Clinton ever contacted IRM to request such a solution, despite the fact that emails exchanged on her personal account regularly contained information marked as SBU.

In other words, this is pretty much all the stuff we already knew. The Department of State apparently has epically bad email systems. Nonetheless, Hillary Clinton should have consulted with State’s IT staff about her personal email account. She didn’t. She should have turned over her work emails sooner. She didn’t. Ditto for her staff.

And that’s about it. Hillary screwed up. The IG report doesn’t present any evidence that her system was ever hacked. Nor does it suggest that Hillary was deliberately trying to prevent work-related emails from being retained. Nor was she the only one conducting official business on a personal account. Colin Powell did it too, as well as dozens of other State employees.

Nonetheless, Hillary exercised poor judgment here. That’s been clear for a long time. Beyond that, though, there’s not much more to say.