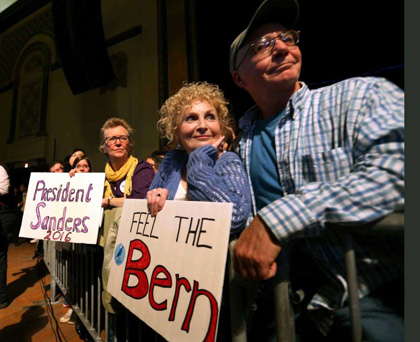 Lately, the news has all been about how recalcitrant Bernie Sanders is. It’s not just that he’s continuing to campaign even though he no longer has a chance to win, but that he and his team are campaigning pretty negatively. “It is clear that millions of Americans have growing doubts about the Clinton campaign,” he said in a statement yesterday, and his supporters continue to paint Hillary as corrupt, scheming, and a pawn of Wall Street. The chaos in Nevada over the weekend sent this dynamic into hyperdrive, leading to this instantly infamous headline in the New York Times a couple of days ago: “Bernie Sanders, Eyeing Convention, Willing to Harm Hillary Clinton in the Homestretch.”

But now comes Sahil Kapur to tell us that behind the scenes, Bernie knows it’s over and he’s letting key Democrats know it:

As tensions were escalating between Bernie Sanders and Democratic Party leaders over the chaos caused by his supporters at a Nevada convention, Dick Durbin got an unexpected call from the Vermont senator. Durbin, the No. 2 Democrat in the Senate, came away from the conversation on Wednesday convinced that Sanders, who has all but lost the presidential nomination battle to Hillary Clinton, understands the need for party unity and will do his part to defeat presumptive Republican nominee Donald Trump.

“We talked about the demonstrations and such,” Durbin said Thursday in an interview. “I am convinced, as Bernie has said repeatedly, he is going to be on the team to defeat Donald Trump. I don’t have any question in my mind.”

….Sanders has reached out to multiple Senate colleagues in an attempt to assuage them. Among them is Senator Barbara Boxer of California, whose keynote speech at the Nevada state Democratic convention last weekend was disrupted by rowdy Sanders supporters in a situation she described as frightening and out of control. Boxer said she conveyed her concerns to Sanders in “a really nice talk” with him Tuesday. “I told him how bad it was in Nevada. He said he was distressed about it, and he expressed chagrin about it. I told him ‘Bernie, you need to get a hold of it,’ and he said he would.”

“He said, ‘I can’t believe my people would do this,'” said Boxer, who is stepping down from the Senate in January. “He got the point.”

There’s some evidence that Bernie is, in fact, toning down the attacks on Hillary lately, though his supporters and staffers will probably be harder sells. But Bernie has never had very tight managerial control over his people anyway. The nickel summary is simple: tempers are running high; Bernie knows it; and everyone just needs to give things a little time to run their course.

That’s the latest, anyway—though the conventional wisdom could shift again by next week. Stay tuned.