Michael O’Hare is delighted with the new San Francisco Museum of Modern Art, but he does have a couple of complaints:

What’s not so great, so far: while it’s free for anyone under 19, standard admission is $25. This is very bad, and a big deal: if you spend that much to get 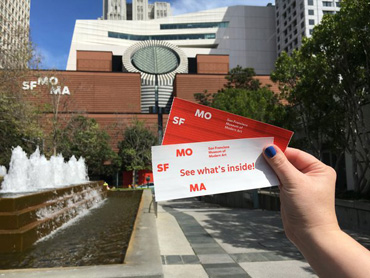 in, you are under pressure to try to see too much and stay too long.

….There is only one open evening a week, otherwise it’s 10-5, which is as silly as a theater programming nothing but matinees. Museums have a disagreeable tradition of being for tourists and the unemployed wives of wealthy businessmen. A museum is the ideal place for a first date, and even to meet new people (no pressure, and lots of stuff to talk about); why make it so difficult to go there after work?

On the second point, this is a good example of my habit of being wary of obvious complaints. I’m certain that every art museum executive in the country is aware of this issue, so it’s pretty unlikely it’s happening out of ignorance or malice. There’s probably a very good reason for it. We’d just have to ask. At a guess, that reason is that it’s been tried by lots of museums before and it’s a steady money loser because nobody comes. I’ll also guess that oldsters like Mike and me might be wrong about kids thinking that SFMOMA would make a dandy first date. Just saying.

The first point is a little different. Sure, high admission prices are also an obvious problem, but I’m surprised museums don’t try a theme park solution that was pioneered by, of all companies, Blockbuster. (Well, that’s the first place I encountered it, anyway.) Keep the price at $25, but make every ticket automatically good for three days. My guess is that this would have a minimal effect on revenue, but for those few who’d like to wander back in a day or two instead of conducting a one-day death march, it would be great. There might be issues with people giving away or selling their tickets after visiting for a day, but I’ll bet there’s a tech solution for that. Silicon Valley is only a few miles away, guys. Maybe every ticket includes a photo. If you don’t want your photo taken, then it reverts to a one-day ticket. This might well be worth giving some more thought to.

And if you’ve made it this far, here’s your reward: San Jose Teen’s Glasses Prank at San Francisco Museum of Modern Art Goes Viral. Really, you need to click on this. It’s hilarious. A Sokal hoax for the modern art biz.