We asked: “What would you guess is the current unemployment rate for four-year college graduates between the ages of 25 and 34?”…The most common answers for college graduates were between 20 and 30 percent. Perhaps an understandable mistake….But what surprised us was that the majority of people thought that unemployment rates for those with college degrees were higher than for those without.

….We posed the same question to our friends and parents. Many have college degrees themselves; some are educators. They, too, mostly guessed that college graduates would be more likely to be unemployed than nongraduates….We ran the quiz one last time with the same question and anchor, structured as a multiple-choice quiz. This time, nearly half of the people in the survey guessed that college graduates had higher unemployment rates. We had to concede that we weren’t witnessing a mirage.

Yes! Yes you are!

As near as I can tell, anytime something becomes familiar enough to intrude on the public consciousness, it falls into the 20-30 percent trap. That seems to be the all-around perception of “a smallish but still newsworthy amount.”

That said, the news media still shares a lot of the blame for this, because they’re the ones who collectively decide how much to cover stuff. By over-covering the alleged employment woes of college-educated millennials, they encourage people to think the problem is worse than it is—and they distract attention from where the problem really is. The truth is quite different: even at the height of the Great Recession, the unemployment rate of college-educated millennials never cracked 5 percent other than momentarily. It was young high school grads who suffered from astronomical joblessness: 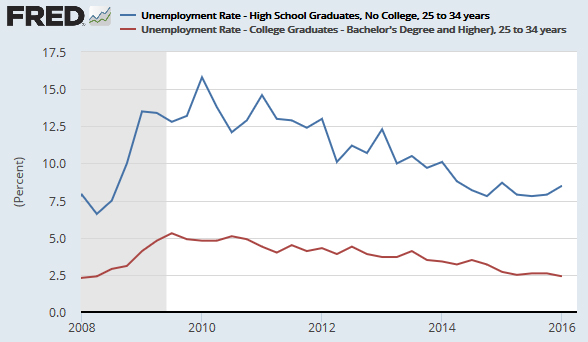 But wait! Maybe college grads got jobs, but they were all crappy jobs that paid peanuts. Not really. College-educated millennials took a beating during the Great Recession, just like everyone, but rebounded to their 2003-05 level after three years and have rebounded even further since. Young high school grads, by contrast, are still making about 10 percent less than they did in 2003-05: 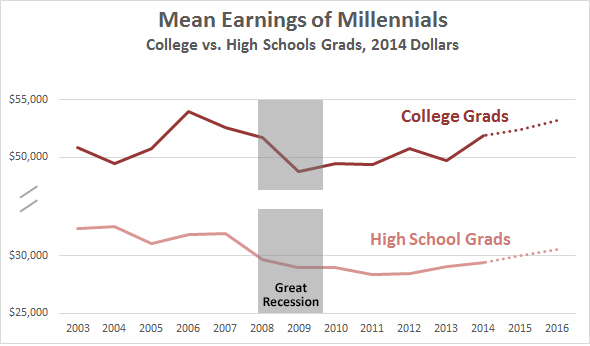 (This is from Census table P-28 here if you feel like checking it out yourself.)

College-educated millennials get all the attention, but that’s not because they have it so bad. It’s largely because they loom large in the minds of the press corps—who are all college educated themselves—and because they’re verbal enough that they write a lot about themselves. High school grads, not so much. But they’re the ones who were really hit hard by the Great Recession.